An Evening of Murder: The Tangled Web - Universal Statistics 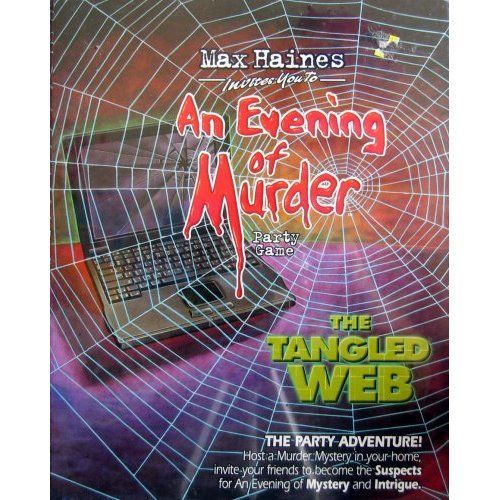 One in the series of "Max Haines Invites You To An Evening of Murder (tm)" party games. Plays like the "How to Host a Murder" series. Components not as colorful as earlier releases (Canada Games) in this series. This particular edition is "the Tangled Web." From the box... Crime Scene: It happened in the Cyper Place Cafe, a high end Internet Cafe where you can browse the web or catch some jazz, blues or rock and roll. Until tonight you knew each other only by your 'alias'. You have been having intimate 'parties' on-line in your private chat room "The Steam Room" for about a year now, but never in person. You finally, after all this time, decided to meet to celebrate the on-line engagement of 'Love_King" and 'Zenia'. It was during cocktails that the lights went out. Immediately after, a serving tray of glasses fell crashing to the floor. When the lights went back on, the waiter and a Black Widow spider were lying on the floor. Both were dead. None of you had any idea who the waiter was. Someone reached into his pocket and looked into his wallet. His name was Alfred Weekes. How could that be...Alfred Weekes 'Love_King' is right here sitting with you and very much alive. Or is he... The Suspects: Cassandra Lippard "Sorceress": She was sweet, caring...perfect in every way. They called her a "goddess"...or would the "devil's consort" be more fitting? Pierce Cameron "Terminator": Inhumanly calm, cool and collected. Nothing fazed him. When there was a job to be done he was your man. Roland Patterson "Hotrod": A 'free spirit' without a care in the world. He traveled around the country with his Harley Davidson, his laptop...and one big attitude. Stuart Binks "Latrodectus": A computer whiz whose first love was a Commodore 64. He didn't have many social skills. How was he with murder? Eliza Kelly "Zenia": Alfred's fiancee. Her dream was to be happily married and have a family. Had she found her Love King or had her dream turned into a nightmare? Alfred Weekes "Love_King": He was madly in love with Eliza. Her happiness was all that mattered to him. How far would he go to keep her happy? Jessie Raven "Nympho": No man could settle her down. She couldn't get enough. Did she resort to murder to satisfy her urges? Phyllis Birch "Wildcat": Shy and withdrawn until she places her fingers on that keyboard and turns into a fierce tiger waiting to pounce.