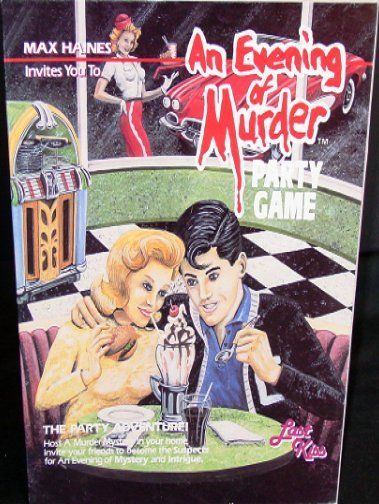 One in the series of "Max Haines Invites You To An Evening of Murder (tm)" party games. This particular edition is "Last Kiss." Same format as the popular "How to Host a Murder" line. From the Box: Welcome to an Evening of Murder. this is a "party adventure" designed to create a night of intrigue and excitement for you and your friends. Within the comfort of your living room you set the stage for solving a MURDER. You and your guests become the suspects. Each have hidden backgrounds and secret clues. Cast your inhibitions aside, apply your imagination, and determine who the murder is, how it was done and why. Crime scene: Go back in time... It's 1964 and the jukebox is rockin' in the corner of the Sugar Shack Cafe. Cherry Cokes... 57 Chevy's... The Twist... and MURDER as Elmdale High's head cheerleader, Sue McNaughton, (also known as 'Runaround Sue')is found dead under suspicious circumstances... The Suspects Johnny B.: An ambitious rock & roll singer. He had the voice of an 'angel' but was he 'a devil in disguise'? Jennifer Hughes: Sue's best friend and rival cheerleader. She was 'true to her school' but was she to Sue? Chad Cunningham: The handsome captain of the football team...every girl's dream...but had he 'lost that lovin' feeling'? Leslie Martin: The beautiful homecoming queen with the temper of a spoiled princess. Why was her favorite song 'Two Faces Have I'? Frazer Watson: The brainy misfit...has too much studying turned his mind into 'bits and pieces'? Lauren Sinclair: A shy and unpopular wallflower. Was she 'a prisoner of love'? Dean Hudson: The black-leathered 'leader of the pack'. Obsessed with motorcycles and blond cheerleaders...was he heading for a 'wipe-out'? Cindy Lewis: The sexy Go Go Dancer with a tight mini-skirt and looks that could kill. Was she more than just 'the little town flirt'?