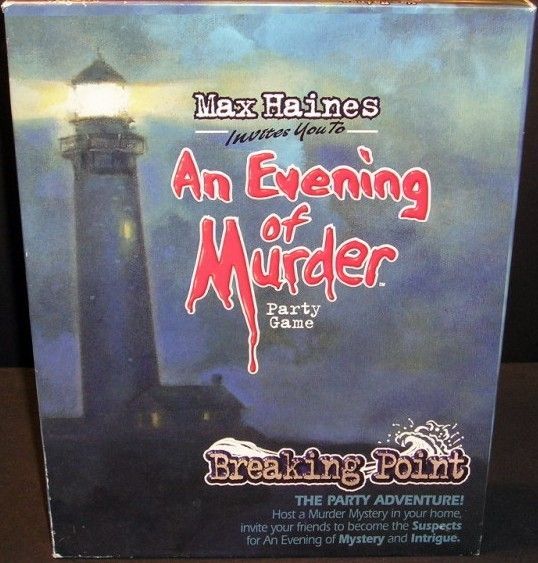 One in the series of "Max Haines Invites You To An Evening of Murder (tm)" party games. Plays like the popular "How to Host a Murder" series. This particular edition is "Breaking Point." These later editions (Irwin Toy) feature black & white components. From the box... Crime Scene: When the cold wind blows and the sky darkens across Breaking Point, mariners have told of hearing the eerie screams of the legendary "White flowering lady". Faithfully and loyally Willard Dobbs upheld the family tradition and kept a light glowing nightly in the old stone tower. On that fateful night, the sea rose and as the sky grew dark, the fog moved in. For the first time in two hundred years there was no light in the Breaking Point Lighthouse. For those who ventured out, there was nothing to guide or protect them from the vicious sea. Willard Dobbs' body was found sprawled at the top of the lighthouse staircase. He had been murdered! The Suspects: Captain Robert Osborne: "Captain Bob": A true Captain of the sea. There was only one way to do things, his way. Lynda Kingsley: A Real Estate agent, the best in her field. Had she set her sails too high? Sam Halloway: The coast guard at Breaking point. Was it time to bail out? Annie Dobbs: The lighthouse keeper's unstable daughter. Had she reached the point of no return? Travis Mitchell: The manager of the marina. Did he find himself up the creek without a paddle? Dr. Pauline Radford: A highly popular Radio Psychologist. Had she rocked one boat too many? Patrick Wilder: A multi-millionaire and businessman. Was he sailing too close to the wind? Shelby Lansing: A renowned author of many murder mystery novels and true crime articles. Was she getting confused between fact and fiction?