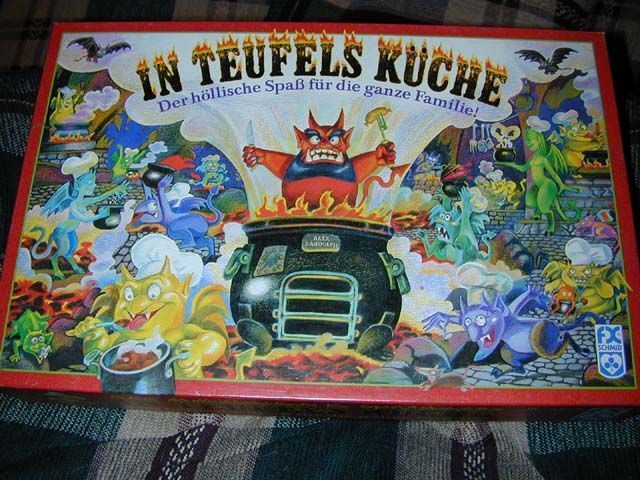 In this fun, light children's game that translates to "In the Devil's Kitchen", players move little devils in chefs' caps around the underworld, collecting pots, trying to be the first to collect 10 points worth of dishes. Before the game starts, each player secretly assigns a value of 1, 3, 5 or 'milk' to each of the four pots of his color, then players take turns placing their pots on the board. Each player's turn consists of rolling dice and moving his devils appropriately, either trying to get to another player's pot, or carrying one back to the kitchen. If a devil brings milk to the kitchen, it explodes, and the devil carrying it is removed from the game. A large plastic stove in the middle of the board is the game's exciting gimmick, and comes into play when two opposing devils share the same space and start dueling. Each player takes turns pushing the plunger that forms the oven's stovepipe, and eventually a large devil pops out, deciding the winner! Is a rethemed and slightly altered version of the author's earlier Top Secret.