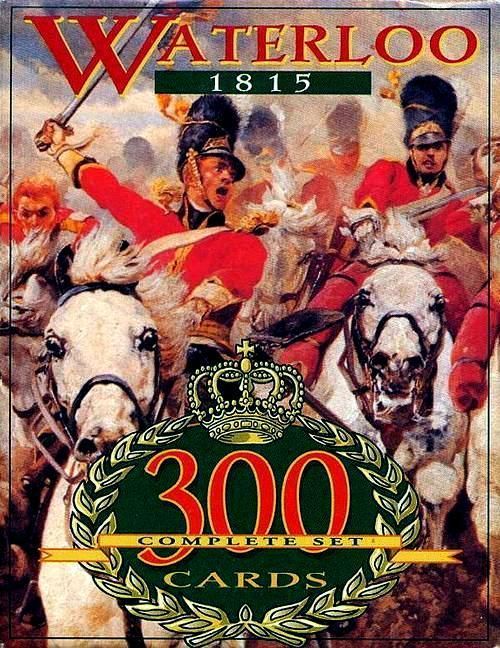 Recreate the climactic Waterloo campaign with Eagles: Waterloo edition. Eagles is a fast-paced, fun, and historically accurate simulation of Napoleon's final campaign. Collectible Each Eagles Waterloo deck contains 60 cards, the cards are selected from the 300 different cards that accurately portray every general, regiment, battery, and significant terrain present at the Waterloo campaign. Each Eagles card has been printed in three versions: Gold, Silver, and Bronze. Gold cards are rare, silver cards uncommon, and bronze cards are common, but each version of the card will has the same game effect. This will allow gamers to obtain a complete set easily while collectors can hunt for a Silver or Gold series. Full sets are also available. Historical The regimental uniforms and the portraits of the generals are historically accurate, providing the Napoleonic war buff with a detailed, graphical, order of battle for the Waterloo campaign. Card identities are printed in French, English, Dutch, or German depending on the nationality of the regiment. The special cards and the rules recreate the flavor of the campaign and the Napoleonic period. Four battles can be played: Ligny, Wavre, Quatre Bras and Waterloo plus the full campaign containing the 4 battles or eventually a fictitious battle of Charleroi. All artwork and graphics in the game Eagles was created by RPG/Historical artist, Eric Hotz (www.hotzartworks.com).