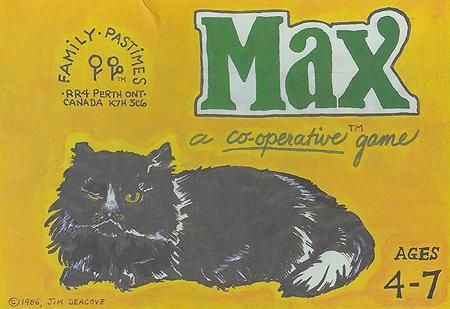 There are four animals in the game. All the players become responsible for the bird, mouse, and chipmunk's safe journey to their home in a tree at the end of the gameboard path. Unfortunately the tomcat "Max" is a natural hunter and chaser (he can't help himself) and is a continual threat. The goal is for the players to work together to get the three animals to the safety of the tree. All the animals move based on random dice rolls. Two singular colored pips are possible, green and black, and are evenly distributed on the two dice. A black pip moves Max one space, while green pips can be distributed by player consensus (teaches logic, consultation and decision making) among the other animals to move them. Obviously Max has a better chance to move, more often and further than the others creatures who share the green pip rolls. On the other hand Max can only move forward, as well the players can opt to move their animals before or after Max. The players also have the option of using four cat treats to call Max back to the starting position, allowing the other animals to escape possible capture or lengthen their lead. Each animal has their own special short cut on the game board to speed their journey or dart from Max. Unfortunately the short cuts could be missed by over-shooting the short-cut entrance. However if Max lands on any short-cut entrance, he must take it on his next turn. In fact Max can end up between or even ahead of the other animals as they advance down the path together. When Max reaches the base of the tree, he camps out and waits for the animals behind him, who will have to risk a final leap on and off Max's back to get to safety. The players all win or lose depending on how successful they are at saving the bird, mouse and chipmunk from Max.