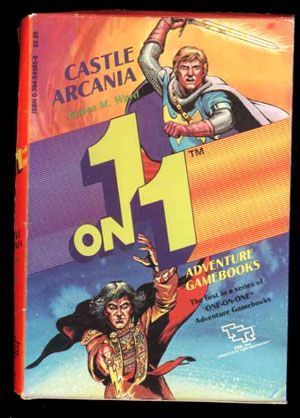 You Are Eric Sunsword, Legendary Knight of the Northern Marches (book one title) You Are Neves, An Ancient and Powerful Wizard (book two title) From the Back of the Box: Inside are two books for two players. One of you becomes the Knight, Eric Sunsword. The other becomes his bitter enemy – Neves, the wizard. The two of you meet in magical Castle Arcania. Will you find each other and meet in final combat? Will you fall into one of your opponent’s traps? Be ambushed by his henchman? Or will one of the strange creatures in the Castle get you first! Castle Arcania is the first One-on-One Adventure Gamebook, and involves a fight between a knight and a wizard over the Princess Mara. There are two books in the box set, one for the player of the knight Eric Sunsword and one for the player of the wizard Neves. Players move their characters from location to location, collect items, set traps, use their allies, and come into conflict when the two sides are in the same place at the same time. Conflicts are resolved by using a Combat Table. The players choose numbers simultaneously, and then look up the result on the chart. Imagine reading a Fighting Fantasy book with another player as the Dungeon Master.