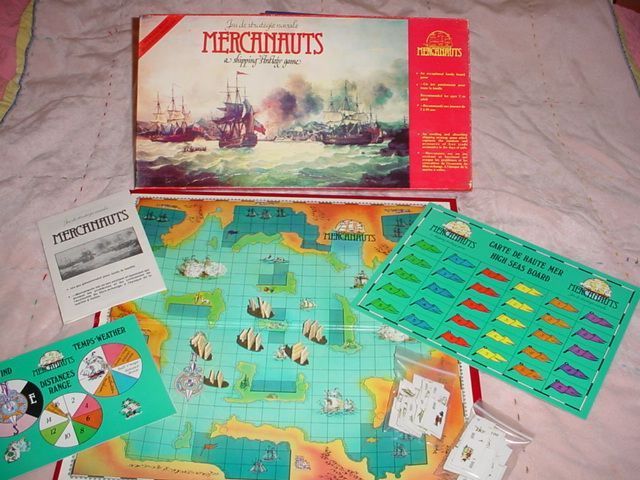 The theme is sailing ship trading and warfare in the Caribbean. It is played on a 22 by 23 square board on which are shown 6 home ports (one for each player), and a number of islands. Each player starts with one fast and one slow cargo ship, 5 food cards and one gold. Islands produce one or more of 6 different valued commodities and players increase their worth by transporting these to their home port. Movement is controlled by three spinners (wind, range, weather) where the weather result modifies that of the range. Ships move orthogonally but never directly into the wind or backwards and players may divide their "range" movement between two or more ships. With the commodities obtained by shipment to home port the players may buy more cargo ships or warships or Martello towers. The latter two may be used to attack other player's ships or in defence. The game ends when one player can no longer continue trading and at this point the value of each players ships, towers and commodities is added up and the player with the highest value wins. From the box: "Board game of trade and warfare based on the days of sail The game objective is to accumulate as much wealth within a predetermined time, and to force other players out of the game. Possible strategies and game tactics which could be used to defeat other game players include: + monopolizing a strategic commodity +forcing-up commodity prices + erecting martello towers on the commodity islands, or in other player's harbors +building a warship fleet to capture or sink opponents ships + forming partnerships, and setting up cartels +combining fleets for trade or military operations"