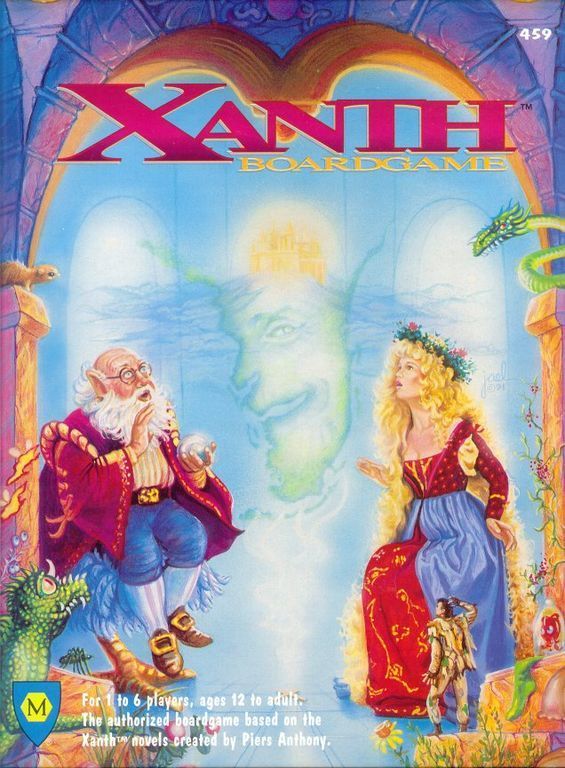 Based on the fantasy Xanth novels by Piers Anthony. From the box: On Xanth... Anyone who doesn't believe in magic must reckon with the rainbow, which shows up only at a distance and retreats if anyone walks toward it. If one person stands still and another walks, the rainbow remains in place for the one and retreats for the other - simultaneously. It is one-sided, like a one-way path, invisible from the other side. That is obviously magic. - Piers Anthony Xanth, the magical, pun-filled world of Piers Anthony's fantasy novels, comes to life in this hilarious game. As one of many colorful characters, players must travel across land and sea in order to fulfill their wild and wacky quests. For 1 to 6 players, ages 12 to adult. Contents: 162 playing cards, 15 dice, 6 pawns, 12 chits, gameboard, rulebook, sorting tray. There are 3 card types used in the game, Chair Actors (Characters), Events/Encounters & Quests. The majority are E/E cards. Only Character cards have colour illustrations, the others being monochrome or text only. A small errata sheet is included. Simple & Easy Game Each player starts with 2 character cards and a Quest card (which determines their starting area on the map), with the character's Cunning & Strength, plus a Talent - an extra rule or exception they can use, tying in to the character in the novels. Each turn starts by drawing an Event/Encounter card, playing it if it's a Disaster. Other E/E cards include objects to assist in some way, commonly in combat, hazards to play on other players, additional characters (mixed in from those not in play) etc., often limited by area (you have to get to some areas to activate some objects, for instance). If there is no Disaster, players move their pawn across the board (normally 2 areas, Characters, Event cards & the area characteristics can modify this). The other players may then play Events or Creatures on them, possibly limited by the area. Characters can attempt to avoid encounters (roll dice under Cunning), or may fight (roll a die under Strength to cause a wound, repeat until one side loses). The specific encounter or creature may modify this, as can many E/E cards. Players start from scratch if their character is beaten, but can heal by use of certain cards or in certain areas. The first to complete their Quest wins. Still Simple & Easy but Longer Game Same as before, but complete 2 or 3 Quests. This ties in to the 3 Quests set by the Magician Humphrey in the novels. Monaural (Solo) Game Same again, but work through the Quests deck until you are knocked out. hazards are drawn randomly instead of played by other players. Stereo (2-player) Game Same as the Monaural Game, the winner is the player who completes most Quests