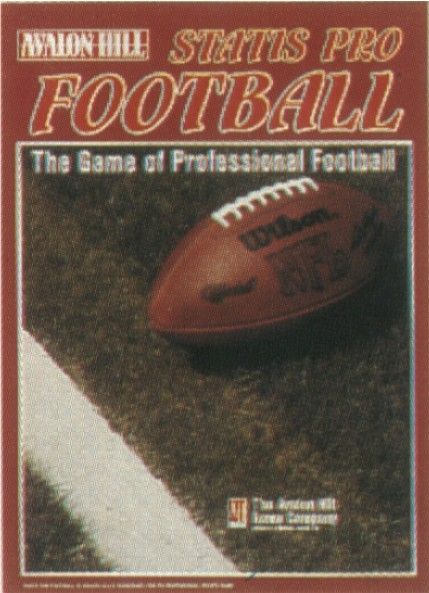 Statis Pro Football is an in-depth, simulation-first football game that uses the AH Fast Action Card system. Individual players are rated for their ability to throw, catch, run, block, rush the passer, etc. Players are the coach for their team, and choose from a selection of offensive or defensive moves (Inside Run, Short Pass or Blitz, Run No Key as examples) which affect the outcome, and then flip a deck of cards to work out the result. So if I call the right pass defense against your pass, it becomes harder to complete the pass, or a Run defense means your Run gets less yardage. But if I get it wrong, my defense may have no effect or even greatly increase your chances. The game rules also cover kickoffs, punts, turnovers, penalties, etc. The basic game comes with stats cards for every player in every team. Avalon Hill produced several years worth of cards for use with the game, which you could buy separately. A strong team will usually overwhelm a weaker team, though good playcalling and some luck with the cards can mitigate that advantage. But by picking evenly-matched teams, it does require some forethought to work your team to a score. The game includes optional endurance rules, which mean that some players must 'rest' before you can re-direct a play to them. This means cycling players and dealing with injuries makes tricky decisions for the players.