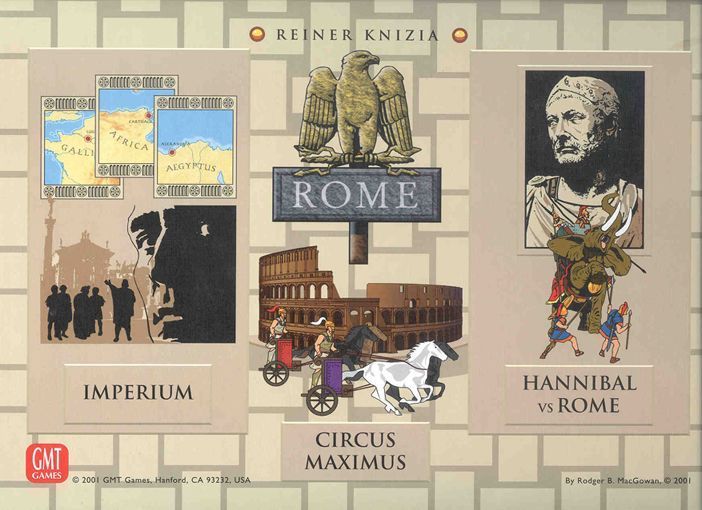 Reiner Knizia has designed a number of games set in Ancient Rome. This collection brings together three of the finest, covering three very different aspects of the Roman Empire: Hannibal versus Rome, Imperium and Circus Maximus. Hannibal versus Rome is a 30-minute two-player game depicing the initial struggle for supremacy between Rome and Carthage, which finally established Rome as the leading power in the Mediterranean. It draws on the events of the Second Punic War, during which Hannibal crossed the Alps with his elephants, and defeated Rome in the battle of Cannae. The Roman general Scipio succeeded in moving the fighting away from Italy, into Spain and Africa, where he defeated the Carthaginians at Zama. The map covers the Western Mediterranean. Players move Legions and Fleets, deciding conflicts by the use of cards in order to determine who will be the dominant power in the Mediterranean region. Imperium (a game for two to five players) focuses on Rome's political and territorial expansion during the Imperial period. Powerful families controlled the individual provinces in order to increase their wealth and power in Rome, until the Roman Empire reached its zenith in size in the year 100 under the Emperor Trajan. In each round the two to five players distribute markers onto areas of the Empire, with control of one area being decided each round. The players need to have the right influence at the decisive moment to take control, without neglecting long-term development. It is a game of planning and timing. Circus Maximus leads us into the heart of Rome itself with its renowned public entertainment for the masses; chariot racing. Chariot races were immensely popular in Rome. The Circus Maximus offered room for 200,000 spectators who avidly followed the races, roaring and cheering on their favourites. The courageous charioteers were divided into teams distinguished by different colours. The most successful were worshipped as heroes, but the risks were high and many paid for their fame and daring with their lives. Each of two to five players controls a team of three chariots. In a game of pure tactics, players receive five movement cards that they can assign each turn to individual chariots as they wish. The first to bring all three across the finish line wins the game and the laurel wreath. Note: the 3 games in this were previously released in Neue Spiele im alten Rom