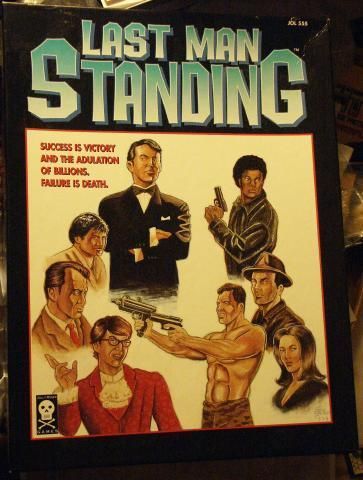 Each player chooses one of eight characters that spoof popular spy/action-movie characters or actors: James Blonde, Emma Shell, Austin Flowers, Indiana Smith, Jackie Chang, Dirty Larry, Shift, or Arnold Weissenmeiner. They wander around a sort of super-generic indoor area with corridors, rooms, and safes (somebody's HQ? no villains are in evidence), trying to wipe each other out with their character abilities and the weapons and specials they find in the safes. Obviously enough, the last man (or woman, or team) standing wins. Reminiscent of "Frag," but with more complicated mechanisms. The modular boards are square grids on the same scale as most of Jolly Roger's other games; in fact, the boards for "Orcs at the Gates" and "Maul of America" can be used with this game. Approximate playing time is totally arbitrary; it will vary depending on the number of players, the size of the playing area, and so forth. Two hours at least matches the standard length of Jolly Roger's timed games. Online Play Ludoholic (no longer available)