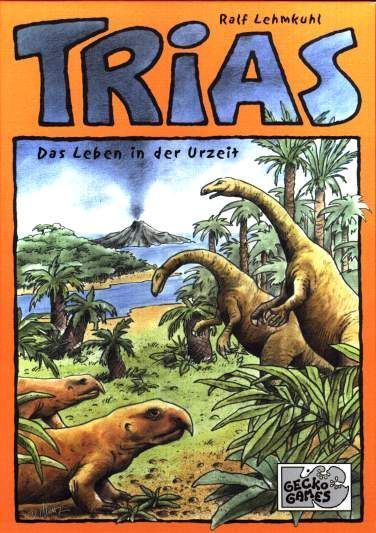 Dinosaurs reside on the modular hexagons of the super-continent Pangaea. Each hex can only support a certain number of animals. Not only that, the continent is splitting up with parts of the land disappearing and new lands emerging elsewhere. Players try to disperse as widely as is wise while still dominating each continent where they exist. The game ends as the meteorite strikes, ending the age of the great dinosaurs. Players begin by placing herds of their dinosaurs on the single continent of Pangea, made from tiles of various terrain types. They then take turns, which comprise of drifting tiles, conducting optional actions, and finally resolving any of their own tribes that have been left in water or on overpopulated tiles. The first phase, the drift, involves a player moving a landscape tile of the same type as depicted on the card they play. The tile must be moved further away from the South Pole (the centre of Pangea) than it already is, must remain a part of the same continent and must be attached to a continent with that player's herds. Players have 4 action points to spend on other optional actions, including another drift, migrating herds, rescuing swimming herds and reproducing to create more herds. Points are scored during the game whenever a new separate continent is formed as a result of a landscape tile drift, as well as at the end of the game for each continent. During the game, the player with the most herds on the new continent scores 2 points, while the player with the second-most scores 1. End-game scoring is much more significant, as the player with the most herds gains 1 point per landscape tile on the continent, and the player with the second most scores half that amount. The final round begins when the meteor strike card is drawn, and the game then ends. After final scoring is completed, the player with the most points wins. Premiere: Essen 2002