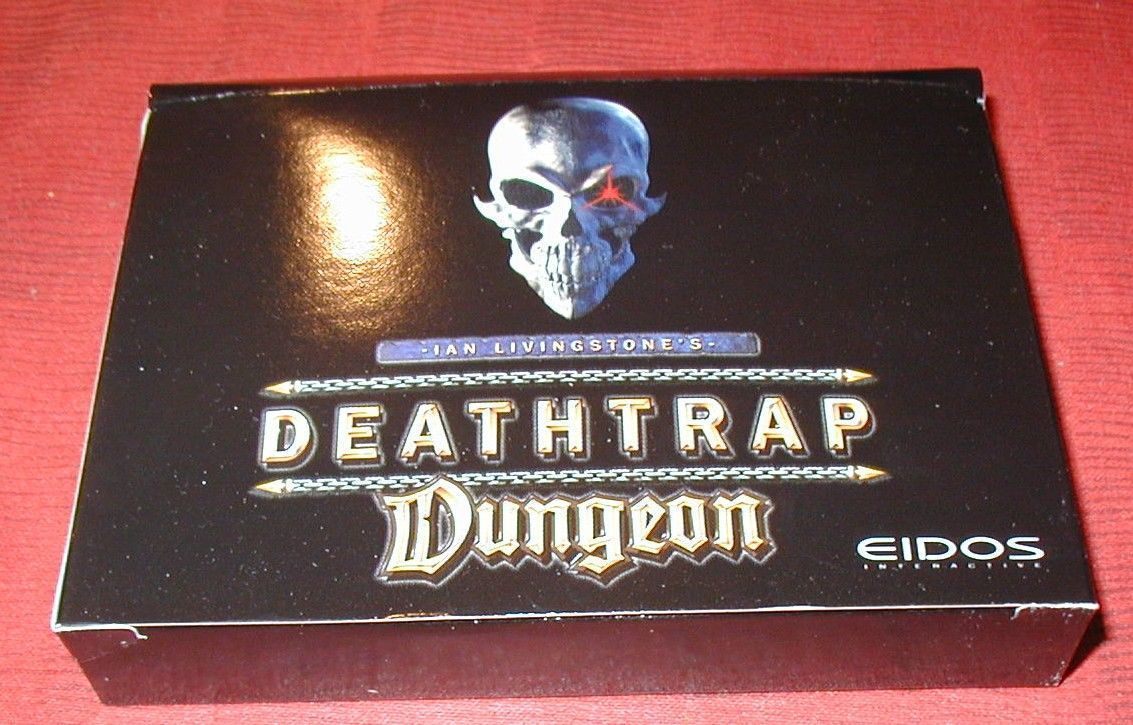 The Deathtrap Dungeon card game came with some copies of the PC version of the Deathtrap Dungeon computer game by EIDOS. The cards themselves feature a whole host of nasties, including Skeletons, Orcs and Bloodbeasts. The game is actually based on an ancient Chinese card game called "Zheng Shang Yu". The goal of Deathtrap Dungeon is to 'kill' all the monsters by discarding cards, all of which have a creature on them. The quicker you do it the better. All the cards are dealt out and the player who gets the 'Exploding Pig' starts by discarding the Pig and another card. Players arrange their cards into sets, e.g. Orcs, Skeletons, Bloodbeasts etc, and the first player puts down any number of cards from the same set, face up. The next player can then play if they can put down the same number of cards, but with a higher value. Therefore Four Skeletons, which are worth 3 each, could be followed by Four Warriors, which are worth 5 each. If a player cannot do this, they pass and play moves on to the next player. The winner of the hand is the last player to put down the set with the highest value. This person then starts the next round. A note is made of the order the players finish in, and they are then ranked: Winner = The Big Hero! 2nd place = The Hero 2nd to last place = The Wimp Last place = The Total Wimp! The cards are shuffled and re-dealt for the second round, but before the game begins again, The Total Wimp must hand over their 2 highest cards to The Big Hero and the Big Hero gives back any two of their cards. This also happens with The Wimp and The Hero. The game continue until 4 rounds have been played. There are also Special cards in the deck. Also included are Chaindog and Red Lotus, two player characters from the computer game, and can be used to add to any set, however played on their own they have a value of 0. The Killing Machine, which can be played on its own at any time, stops a hand, the player that used it begins the next hand.