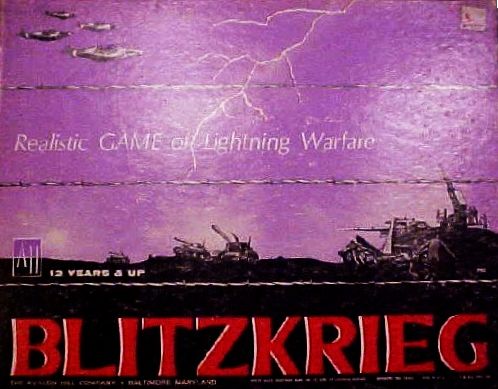 Blitzkrieg is one of Avalon Hill's earlier releases. The game is a fictional representation of the breakout of World War II. Five minor countries become engulfed in a tremendous conflict for territory waged by Great Blue and Big Red, the major countries. Blitzkrieg is one of the classic Avalon Hill war games that set up the military simulation board game hobby. Blitzkrieg is a board game with printed cardboard square pieces played on a hard mapboard. The mapboard is hard paper stock that is the same as what one would find with a Monopoly playboard. Printed on the mapboard is a map on a hexagonal grid (hex spaces, or simply "hexes"), and terrain for land, beach, cities, rivers, roads, mountain, desert, and borders. There are a few charts, such as the one for the combat results table, and a die for random outcomes. The cardboard pieces represent large military units. There are brigades, divisions, squadrons and air wings. The different types of military units represented are infantry, airborne, rangers, armor, shock artillery, fighters and bombers. Navel action is allowed but abstracted. There are three levels of the game, the basic game (simplest), advanced (all the complicated rules), and tournament (fast play with advance rules). There are optional rules for the advanced game. The basic game only includes the land game, no naval invasions, and is the best starter tool for new gamers. The basic game has a more simplified combat results table. The advanced game adds special unit abilities, supply restrictions, air war and strategic bombing, naval invasions, commando raids, special desert supply restrictions, etc. Tournament play was intended for play at game conventions such as the annual world board-gaming convention in Harrisburg, Pa. The nice thing about Blitzkrieg is that it uses a system that is similar to most other hexgames. So once one learns one game, the learning curve of a similar game was not as steep. Such is the case with many of the old Avalon Hill Classics, once you learned one game all of the other played the same way with some minor variation, only the campaign is different. The basic play used unit types and combat ratings. As expected, infantry would have different abilities from armor or artillery. Each unit had rating printed in large print on the piece, (or "chits," as they are called). For example, take a 1-4 infantry brigade. The "4" is the movement factor per turn, so the unit can move four hexes in clear terrain per turn. Movement along a road is 1/3, so a 1-4 infantry can move 12 hexes if moved solely along a road. Each side is permitted to move all of their units up to their full movement allowance. The first rating, the "1" in this case, is the combat factor. Combat is worked out in odds, so that if one moves his 1-4 infantry next to the enemies’ 1-4 infantry, the combat odds are 1-1 (not very good in combat). There is nothing preventing one from ganging up on an enemy unit, and in fact this is the general tactic even in real life. So if one brought up another brigade into the attack there would be two 1-4 infantry brigades against the enemy's single brigade for 2-1 odds. For example, if the enemy had a 4-4 infantry division sitting on a clear hex and on their turn a player brings up three 4-4 infantry divisions adjacent to have combat, this would be at 12-4 odds, which reduce to 3-1. Then one would consult the combat results table under the 3-1 column and roll the die. The results would resolve the combat and tell what losses there were, and who had to retreat. Obviously, the higher the odds will favor that side. Also in combat, terrain would impact combat. A defender in a city or mountain would have their defense rating doubled. For example, a 1-4 infantry in the mountains would defend as a combat rating of 2. Odds are rounded in favor of the defender. From the example above if that 4-4 infantry was defending in a city against those three 4-4 infantry, the odds would now be 12-8, only 1-1 odds (better bring up more attacking troops). When Blitzkrieg came out this type of map wargame was relatively new, so this game was very novel in its time. It is still a good two player game and there is enough variation so it won't get stale. It has a WWII or early cold war feel to it. The two antagonists are abstract, Big Red and Great Blue, which had more to do with the simple printing colors Avalon Hill used back in the early 1960's than any national commentary. In the late seventies and eighties many panned Blitzkrieg since many games seem to grind to a stalemate in the middle of the map. But as a training game this isn't such a bad thing, since that can give a new gamer some confidence to play to a draw.