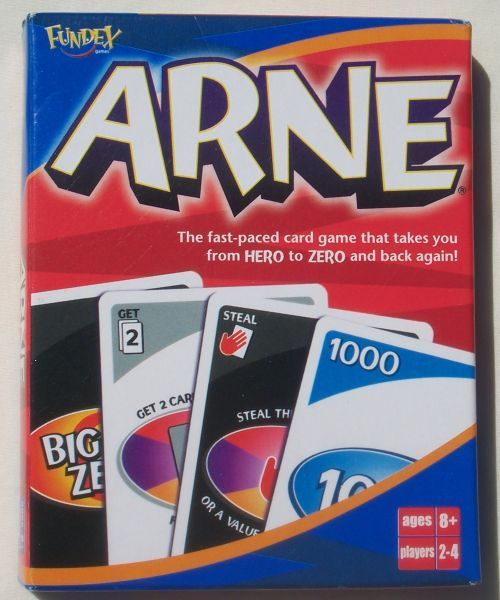 The concept of Arne is new. Arne is cheeky, creative, and chaotic. And always spiced with the most unexpected turns. As a player, you change the direction of the game, take over someone’s turn, protect your own cards, steal someone else’s and wreck the strategy of your opponents. Your luck can turn at any moment: Arne literally goes every which way. Arne is suitable for all ages. A few practice games, and children from the age of seven start playing seriously. Boys and girls mainly enjoy the high tease factor of the game. But the countless combination possibilities make the game just as much fun for adults. You don’t have to know Arne inside out to score well: luck plays an important part. Parents, children, grandparents … everybody’s chances for winning are the same. There are no words printed on the Arne cards. So the game is universal: people of various mother tongues can play together perfectly well. Another great advantage is that the game does not take long to play: a round of Arne takes ten minutes, a quarter of an hour at the most. However, you will not know who is winning until the last cards have been played. Those who have saved plenty of points can be sent back to the beginning by just one card. And those who were not doing well can snatch victory at the very last minute. How ARNE Works! Whoever collects most points wins. Each player first chooses a color and then goes and tries to collect as many points of that color as possible. The other players try to do the same. The point of the game is to sabotage their attempts as much as possible. You do this by making use of the teaser cards. In order to make the game even more fun, there are two sorts of cards: White cards which you may only play when it is your turn Black cards which you may play whenever you want to In practice, all players can play cards at the same time. This means that the tease factor is very high indeed. Re-implemented by: Arne Total