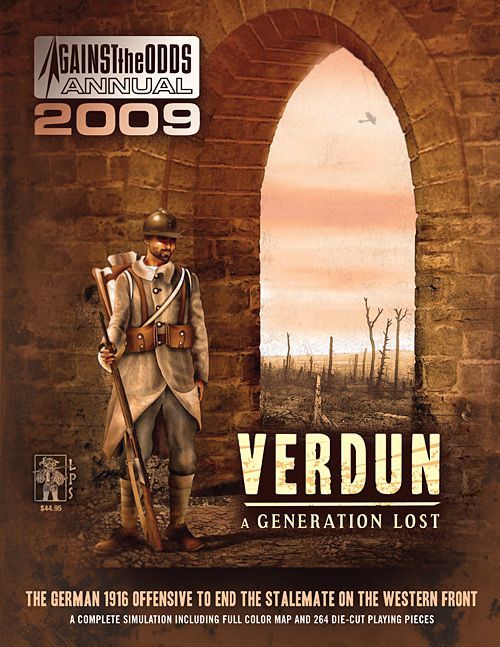 Hoping to bring a decisive conclusion along the Western Front despite the mud-and misery-filled trench deadlock, German General von Falkenhayn launched an attack from which the French could not retreat, and would prove costly for them to defend. The goal of the German offensive was the historic and symbolic city of Verdun. The German attack used new weapons such as poison gas, fighter airplanes to clear the skies of enemy observation planes, and a massive collection of artillery to devastate the defenders and obliterate the extensive French fortifications. The offensive was meant to inflict staggering casualties upon the defenders that would compel the Allies to negotiate. In the end, the Germans also suffered casualties that ran to the hundreds of thousands, making Verdun a symbol of war's inhumanity as well as tragic sacrifice. Designed by Roger Nord, Verdun: A Generation Lost is based on the same design as his other WWI game which appeared in Against the Odds magazine #11, The Big Push: The Battle for the Somme. Verdun: A Generation Lost features a 22" by 34" map that, like The Big Push, uses squares to regulate the game's functions, 264 large counters, and approximately 20 pages of rules and charts. Rules cover artillery, defensive fire, and close assault attacks, various types of weaponry, and there are six smaller scenarios covering pivotal aspects of the battle.