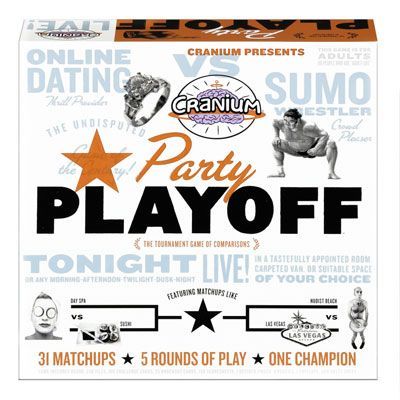 This is a party game where players vote on 32 contenders in a NCAA tournament like bracket. A contender advances to the next round when they receive a majority of the votes of the players. The players vote based on a question asked. For example, the contenders in the first round might be "Dolly Parton" vs. "street mime". The question might be, "Who would you rather be for a day?" All the players debate the match-up and then all openly vote on it. Play continues like this for each match-up. Each player makes their picks, and gets their points based on what contender they believe will win the entire tourney(4), who will make it to the championship round(2 for each pick), who will make it to the final four (1 for each pick), and a bonus pick(4). The bonus pick is where each player tries to guess what one of the other players will choose as the winner of the tournament. The points for each pick is in parentheses. The contenders are drawn randomly from 500 tiles and placed on the bracket in four categories (including an example of one contender from each.) Arenas - aka "Places" - Jamaica Contenders - aka "People" - Mark Twain Moves - aka "Actions" - Showering Gear - aka "Things"- Cocktails After all the tiles are placed, a player draws a random "Knockout"card. This "Knockout" card is the question for the final, championship round. Once every player sees that question, they make their picks and place them in an envelope until the end of the game. The object is make accurate picks as well as secretly convince the other players to pick your choices.