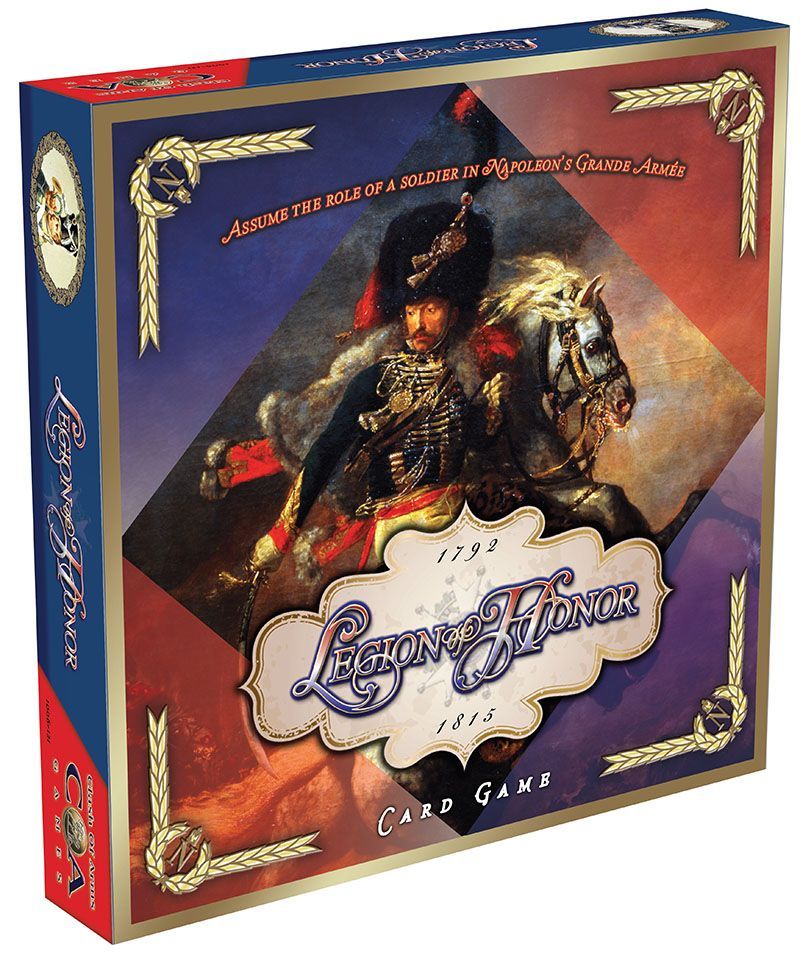 From Clash of Arms May 2008 Works in Progress flyer: Description: Legion of Honor is a highly innovative game that recreates the personal drama of the Napoleonic wars. Using a quick-playing, card-driven game system, each player assumes the role of a French soldier -- or grognard -- starting out as a young sergeant or sous-lieutenant trying to make it in life beginning in 1792. Fortunately for the enterprising grognard, he can look forward to over twenty years of almost continuous war provided courtesy of the Directory and Napoléon! Game play is broken down into a series of campaign seasons that span the period from the Brunswick Manifesto in 1792 to The Hundred Days of 1815. Each campaign season consists of a number of 'In Garrison' rounds and 'On Campaign' rounds. During these rounds, major historical events take place, from the arrest and execution of Louis XVI to the coronation of Napoléon, from great battles to the "whiff of grapeshot." History is fixed, with events happening like they actually did, that is, with one exception: will the English christen that climactic battle of 1815 The Battle of Waterloo or will the victorious French name it La Bataille de Mont Saint Jean?! Against this historical backdrop, grognards take advantage of the opportunities that Fate provides to advance their station in life. Will you be lucky enough to be assigned to the Army of the Orient with Napoléon himself or will you be marooned in the Army of the Rhine et Moselle? Will you exhibit reckless bravery under the Emperor’s eye at Austerlitz, or will you sit out the 1805 campaign, recovering from wounds suffered in a pointless minor skirmish? It’s both up to you and to Fate. Each grognard has a number of qualities that are key to game play: Rank: From Sergent to Marechal (is there a baton in your knapsack?) Title and Office: Reserved only for the most senior grognards Legion of Honor: Has your bravery been suitably recognized? Napoléon’s Notice: You can’t command a regiment without this Glory: Are you known as a bold fire-eater, forever brave? Money: Has fortune shined on you in more tangible ways? Health: Will the predations of war force you into retirement? Charm: Of course; this is a game about Frenchmen, n'est pas? Fencing: Useful for skewering a fellow grognard who insults you Standing: Does your commander hold you in high esteem or contempt? Game Play: Winning the game is achieved in a number of ways: having the highest award in the Legion of Honor, having the highest military rank, or having the most glory or wealth. The game is entirely suitable for solitaire play through six players (and perhaps even a few more). Legion of Honor consists of two short scenarios of 4 hours each that cover the Republican Period and the Imperial Period. The grand scenario spans both periods and takes 8 hours to play.