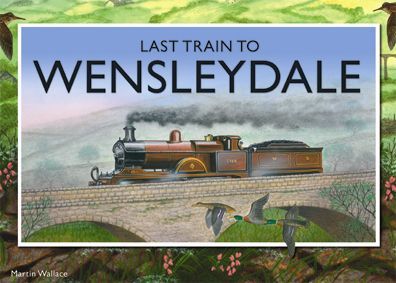 Last Train to Wensleydale is a railway themed game set in the Yorkshire Dales. The aim of the game is to move stone, cheese, and passengers from the Dales to the major trunk routes served by the North Eastern Railway and the Midland Railway. Valleys play a large part in dictating where you can build track. Once you have built a line you must acquire second hand engines and rolling stock to move the goods and passengers that your line connects to. Such a line quickly becomes unprofitable and it pays to have one of the two major companies take it over from you. Building track can also be made more difficult by local residents who object to railways being built on their land. To overcome such opposition you require influence in government to arrange the necessary compulsory purchase orders. Description of the game, from the backside of the box: For many years the train gaming world has been waiting for a game about moving cheese in the Yorkshire Dales. That wait is now over! As the director of a small railway company who has inveigled investment money from gullible locals, it's up to you to see if you can actually make a profit from building track amongst some of the most difficult terrain in England. There's stone to be moved from quarries, and cheese to be moved to market. You might also find the odd passenger who wants to travel to civilization. However, standing in your way is the local farmer, who really does not want you to build on his land. Fortunately you can buy favours from the necessary government committee to deal with such irritations. You will also need a few contacts with other train companies, as you will need their second-hand engines to run on your lines. Finally, once you've sucked all the profit that you can from a route, you must off-load it to a major train company before you are saddled with the losses.