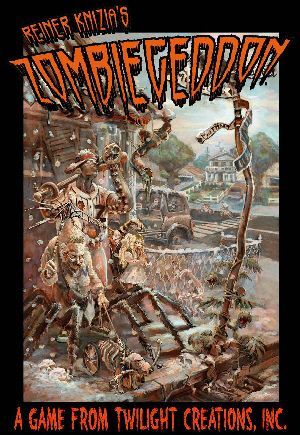 Well, it was nice while it lasted! You have gotten word that the end is near, and Armageddon is right around the corner. (Actually, it begins tonight!) Since it may be a while before you can get to the store, today would be a good time to gather as many supplies as possible. After all, tomorrow might be the beginning of a long, cold, (nuclear) winter! Reiner Knizia’s Zombiegeddon is a fast-paced, perfect-information, strategy game. Each player spends the first half of the game rushing around the board collecting supplies and weapons, fighting off the occasional looter and trying to stop your pesky neighbors from taking stuff that is rightfully yours. (At least as far as you are concerned!) The second half of the game is spent trying to survive. Sure there is some good stuff around, but it certainly isn’t plentiful and zombies are out in force, offering big points for those with the weapons to fight through, and dead ends to those who can't. Whoever has the most stuff at the end of the game wins. This game is based on the same prototype as JÃ¤ger und Sammler.