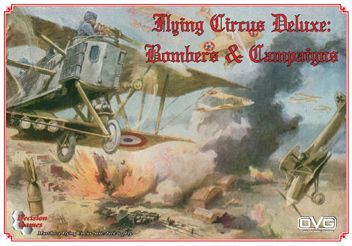 Flying Circus: Bombers and Campaigns continues on the first installment, Flying Circus: Aerial Combat in WWI, upon which it builds. The game system resembles Rise of the Luftwaffe but for WWI. From the back of the box (slightly edited): It depicts the excitement and drama of WWI dog fighting. You fly the colorful and agile aircraft of that war as you make history in the world's first military use of aircraft. This is the deluxe game. You will need the basic game card deck to play this expanded version. Then you will have everything you need to play single aircraft duels and team play with multiple flights in swirling dogfights. This deluxe game adds rules for altitude, pilot abilities--including a deck of 25 pilot cards for historical campaigns--bombers, rear gunners, scouts and other optional rules. This deluxe game also includes cards and rules for playing multi-mission games of famous WWI campaigns such as Cambrai and Meuse-Argonne, along with a "Campaign Analysis" article detailing the development of the aircraft, their tactics and strategy. Now you can become an ace pilot and build your own flying circus. Contents: 110 Deluxe deck cards (bombers, scouts, plus more fighters and action cards) Deluxe Game Rules booklet 6 Campaign cards Pilot log 36 Pilot and altitude cards Dice marker NOTE: Damage markers are not provided with the game. Complexity: Medium (2 out of 5)