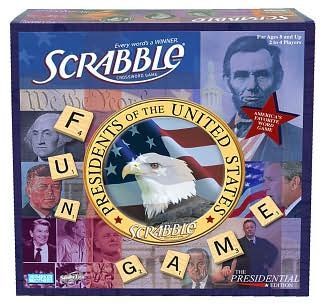 In the classic Scrabble word game, players use their seven drawn letter-tiles to form words on the gameboard. Each word laid out earns points based on the commonality of the letters used, with certain board spaces giving bonuses. But a word can only be played if it uses at least one already-played tile or adds to an already-played word. This leads to slightly tactical play, as potential words are rejected because they would give an opponent too much access to the better bonus spaces. (Description taken from the Scrabble entry). This Presidential edition of Scrabble is based on the familiar classic but with several interesting twists. The letters and basic rules remain the same, but there are several important differences. The board is round and not square. All of the extra scoring spaces are replaced with the various states. They have two effects. The give the familiar triple letter or triple word scoring bonus. In addition each states gives an additional bonus equal to the state’s Electoral College value (after all other modifications). So for instance California is a triple letter space and gives a bonus of 55 points as well (it is also way off to one side). There is a list of extra “words” that are worth extra points; either 5, 10 or 15 points. Some of these “words” are things like FDR or LBJ which would not ordinarily be available to use, while others are regular words like vote that just give an extra bonus. Finally there is a deck of cards showing all of the Presidents. Each card has a bit of historical information and gives a way to either get an extra bonus when played or change the rules in some fashion. The Nixon card for instance allows one to play a word with one letter misspelled. Players receive five of these cards at the start of the game, and can play at most one per turn.