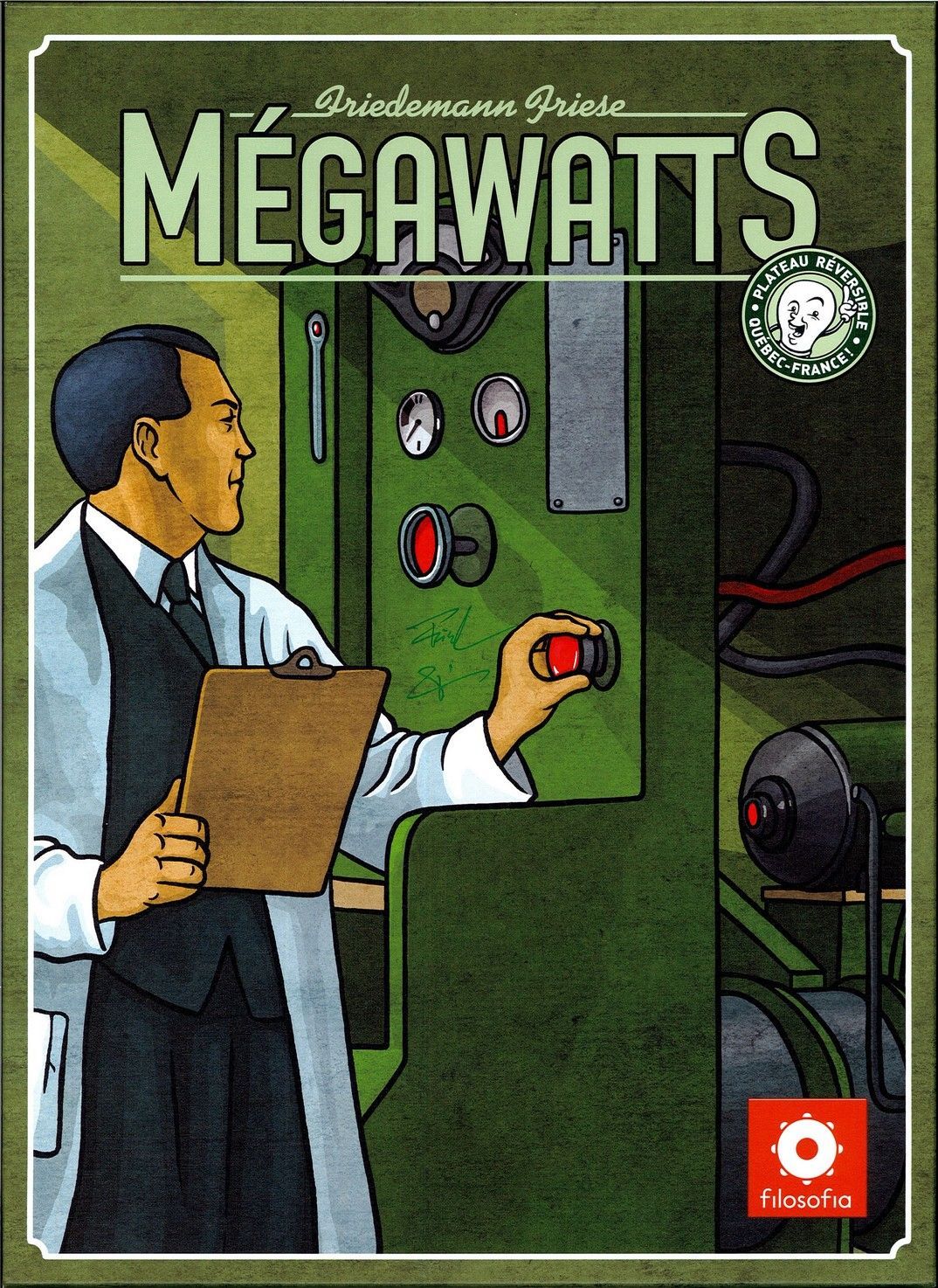 This is the new entry for the Filosofia printing of Power Grid. As the new game changes the map of the original, the two games should be regarded as separate entities. Mégawatts is the French release of the Friedemann Friese game Power Grid. The French edition is produced by Filosofia. As with Power Grid, the object of Mégawatts is to supply the most cities with power when someone's network gains a predetermined size. In this new edition, players mark pre-existing routes between cities for connection, and then bid against each other to purchase the power plants that they use to power their cities. However, as plants are purchased, newer more efficient plants become available, so by merely purchasing you're potentially allowing others access to superior equipment. Additionally, players must acquire the raw materials (coal, oil, garbage and uranium) needed to power said plants (except for the 'renewable' windfarm/ solar plants which require no fuel), making it a constant struggle to upgrade your plants for maximum efficiency while still retaining enough wealth to quickly expand your network to get the cheapest routes. It differs from Power Grid by the maps included. Where Power Grid has the USA/Germany maps, the French version by Filosofia has the Québec/France maps. The Québec map uses minor rules change that makes a bigger use of the renewable power plants to represent the regional reality of hydro-electricity. The ruleset includes the basic game, as in Power Grid plus the minor rule changes for the two maps included. Re-Implements: Power Grid Funkenschlag Expanded by: Power Grid: France/Italy Power Grid: Benelux/Central Europe Atolla Modulis (fan expansion for Funkenschlag) Power Grid: The New Power Plant Cards Power Grid: China/Korea Power Grid: Flux Generator The expansions Power Grid: France/Italy, Power Grid: Benelux/Central Europe and Power Grid: China/Korea include new double-sided game boards. These change the game by not only changing the characteristics of the geography, but also by changing the rules for power plant availability, resource availability, tying plant ownership and/or resource availability and/or price to geographic regions on the map, etc. Incorporated into: Power Grid: QuÃ©bec/Baden-WÃ¼rttemberg (the Quebec map)