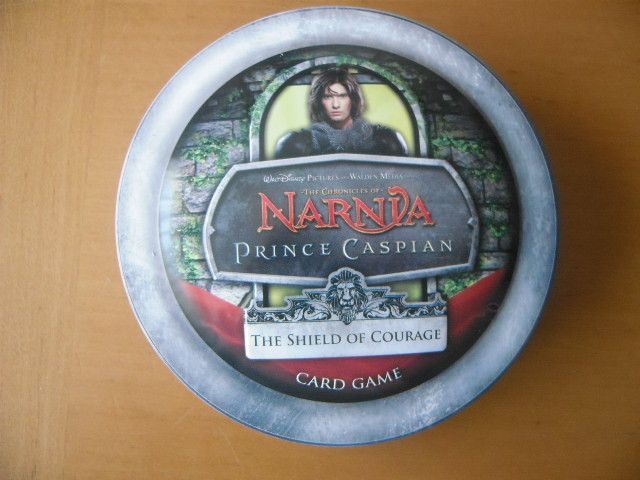 UNAUTHORIZED PRODUCTION The information that BGG has on this item indicates that The Shield of Courage is a non-authorized version of Schotten Totten/Battle Line. According to the designer, Reiner Knizia, The Shield of Courage is not his design and is not approved by him. From the Front Porch Classics catalog (F.P.C. was bought by Sababa Toys in 2007): "In this fast-action two player card game, gain your rightful throne as King of Narnia by claiming five or more Courage Shields. Players strategically try to build more powerful card sets than their opponent. Build powerful Realm, Army, Family, Group and Gathering combinations that are stronger than your opponent and collect your shield. Plays in 20 minutes or less." Rules changes from the original games are: 1) removed rule about claiming 3 stones in a row - you only win by claiming 5 of the 9. 2) Special Power added: Once per game, instead of your normal draw from the top of the deck you may EITHER a) take any card from the deck into your hand and then reshuffle the deck OR b) take a random card from your opponent's hand into your hand.