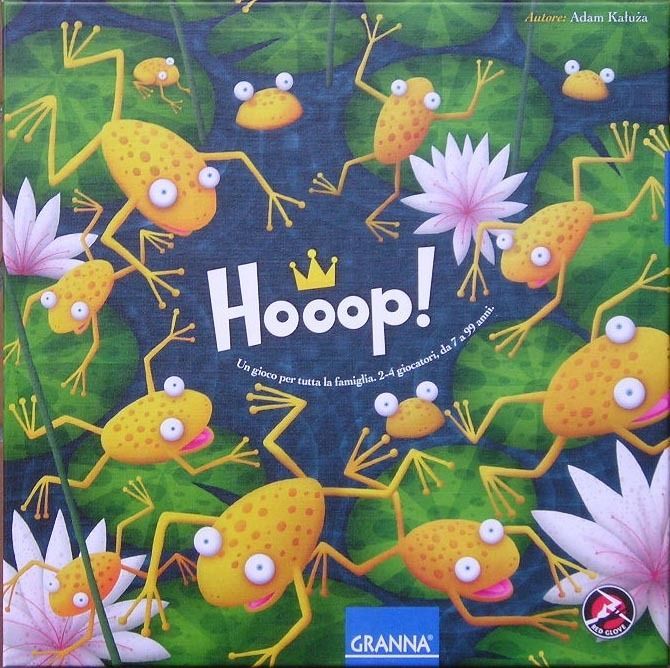 In Hooop!, players need to move their frogs to the opposing player's lilypads, with the first player to do so winning the game. These frogs don't jump wild and free, however, as they must take a bridge that spans adjacent lilypads in order to move. And not only are the frogs semi-lame, but they're also extremely clumsy. After each jump – or "jump", as it were – the bridge used by that frog falls into the lake. The lilypads are set up in a square or pyramid, depending on the number of players in the game, with one bridge between each pair of adjacent lilypads. On a turn, a player either moves one frog from one lilypad to an adjacent one (removing the bridge after doing so, except for the bridge to a player's home, which can never be removed) or places one bridge on the board to connect two lilypads. If a frog lands on an occupied space (other than a player's home), the frog already on that space must jump away in a direction of the active player's choosing, removing the bridge used; if that frog lands next to another, then the process repeats. If a frog cannot jump away when encroached upon due to a lack of bridges, then the initial jump is illegal and the active player must take another action. Each player has four action cards that can be used once each game to place two bridges, jump without needing a bridge, remove an additional bridge, or take an extra jump. Get all your frogs into the other players' homes, with at least one frog in each location, and you win.