The Pocket at Falaise - Universal Statistics 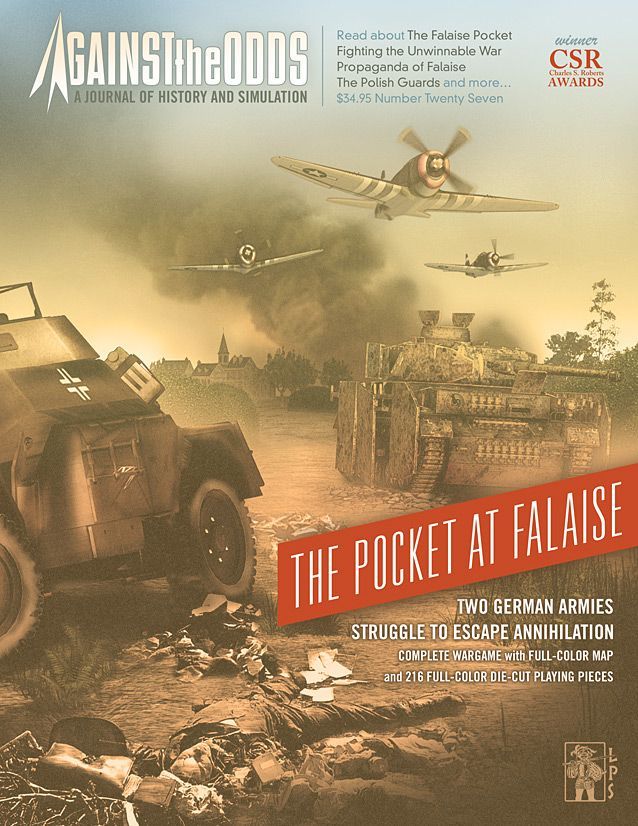 The Pocket at Falaise is a game on the final phase of the Allied campaign in Normandy. After the failure of Hitler’s counterattack in early August to halt the Allied breakout from Normandy, the German 7th and 5th Panzer Armies found themselves on the verge of being pocketed by converging American and British pincers. On the evening of August 16th the Germans began to pull back behind the Orne and Dives rivers, hoping to regroup for a defense of the Seine, even as the Allies attempted to close the trap on some twentyfive German divisions. Ultimately, about half the German forces in the pocket escaped, leaving almost all their heavy equipment behind. It was a major Allied victory, but not a war-winning one. At the end of the Gulf War in '91, cable TV news was full of horrific photos from the "Highway of Death," the route back to Iraq from Kuwait that seemed, almost literally, to be "paved" with burnt-out vehicles. Those who study WWII remember similar destruction... on the road out of the Falaise Pocket... where 25 German divisions raced for survival, while the Allied armies aimed to turn Hitler's delayed counterattack on Normandy from failure to war-ending disaster. In one sense, neither side succeeded. But the devastation was something unprecedented. Now, you have a chance to do better. The Pocket at Falaise puts each player in the difficult position of trying to overcome the obstacles, both human and mechanical, tactical and operational, that interfered with success in 1944. Award-winning designer Ted Racier explains: The story of the Falaise battle is that of two German armies trying to escape a trap set for them by their own high command, and of the Allied armies trying to close the trap, despite the hesitations and divisions of their own higher commanders. While we may think of the Allies as having overwhelming forces, at the actual point of contact, there were relatively weak units trying to "plug the leak" against overwhelming numbers of intensely motivated Germans. The situation means that the "retreating" Germans are actually forced to do a lot of attacking, while the "advancing" allies found themselves in a desperate defense. The Pocket at Falaise uses a chit-pull activation system to capture some of the chaotic and uncoordinated efforts. Players are forced to juggle to make the best out of an increasingly difficult situation, and a combat scale that straddles "tactical" and "operational," aiming to capture the best of both without adding a lot of fiddly rules. A complete set of solitaire rules for the game completes the package. Eisenhower called it, "The Great Killing Ground." What the Germans called it cannot be printed. What you will call it depends on how well you do... Against the Odds. Published in Against the Odds Magazine #27, October 2009. Game Scale: Game Turn: 12 hours Hex: 0.75 miles / 1.2 kilometers Units: Battalion to Brigade Game Inventory: One 22 x 34" full color map Two dual-side printed countersheets (198 9/16" counters) One 12-page Pocket at Falaise rulebook Two dual-side printed Player Aid cards One 6-sided die Solitaire Playability: Medium Complexity Level: Medium Players: 2 or more Playing Time: 4-15 hours