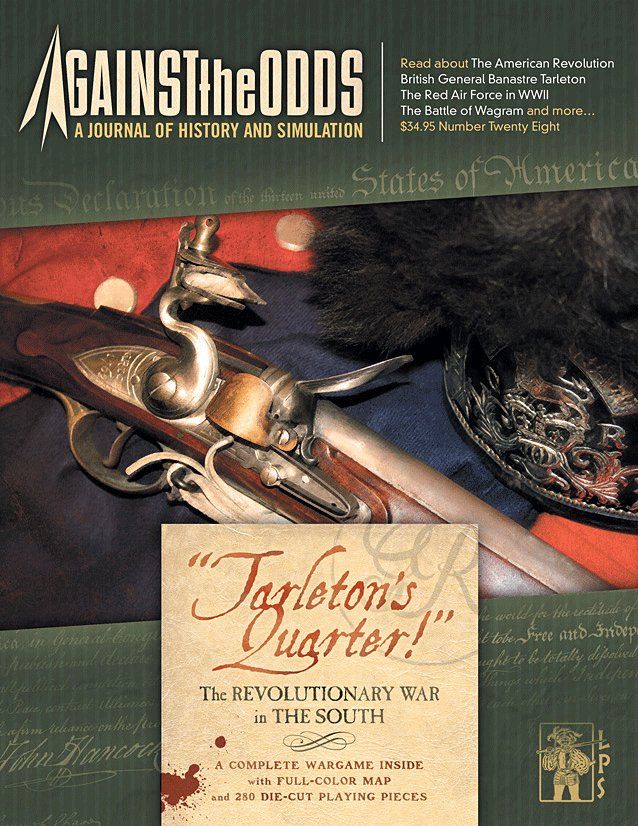 "Tarleton's Quarter!" is a game about the British attempt to win the American Revolution by invading the Southern colonies, The game covers the period from the British landing in Georgia in 1778 to October of 1781 (the historical end of the siege of Yorktown and the surrender of Cornwallis' army). The object of British efforts in the South was to bring the four southern colonies - Georgia, South Carolina, North Carolina and Virginia-back under British sway after almost four years of uninterrupted Continental control. Ideally, the English wanted to "restore civil government," i.e., to return the South to its status ante-bellum with British governors, taxes paid to the Crown, and no expensive garrison to enforce the situation. "Tarleton's Quarter!" highlights some salient aspects of the British campaign in the south. First and foremost was the effect of leadership, and the difficulty both sides had in finding leaders who were bold without being rash. Rarely did energy and sound judgment come in the same package. Another vital factor was the terrain of the southern colonies, or rather, one feature of it: water. The reason that water — in the form of rivers and swamps — is the dominant terrain feature is — surprise! — it rained a lot, particularly in the Carolinas. These facts "on the ground" raise the amount of non-combat losses, like those caused by disease, which made just keeping an army intact such a headache at the time. (There's nothing romantic about losing large numbers of men to something beyond a player's control.) As to why so many people lived in North and South Carolinas' pestilential swamps, it was because those swampy areas were precisely where rice and indigo grew best, and in the 18th century in the Carolinas, that was where the money was; cotton was a much later development. Perhaps the most important factor of all was the continuing British belief in an untapped reservoir of loyalist support in the south. Those in command of the British army knew they didn't have enough manpower to control even the southern half of the American colonies on their own. They were relying on the appearance of a "silent majority" of loyal, but previously suppressed, American subjects who would take control of those provinces swept of Continental forces. Appropriately, you are allowed to indulge in as much over-confidence as your red coat will allow.