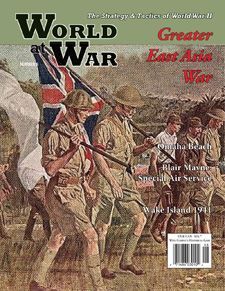 Greater East Asia War uses the much-liked system pioneered in the earlier Twilight of the Ottomans: World War I in the Middle East design in Strategy & Tactics magazine. Greater East Asia War (GEAW) is a two-player, intermediate-complexity, strategic-level simulation of the World War II campaigns waged across China and Southeast Asia. Each hex on the 34x22” map represents 74.5 miles (120 kilometers) from side to opposite side. The map extends from Korea and Manchuria in the north to Indonesia in the south, to the Ganges River delta and Mongolia on the west. Each game turn represents three months. Units of maneuver are corps, armies, divisions and brigades, and they’re presented in the form of 176 large-size, NATO-style counters, with the following types represented: infantry, light infantry, garrison, armor, mechanized, marines, airborne, special operations, cavalry, fortress, headquarters, tactical airbases, strategic airbases, supply, naval bombardment task forces, carrier task forces, and amphibious task forces. The concept of “victory points” (VP) is central to play of the game. Players begin each scenario with a designated number of them. They expend them to gain reinforcements and carry out actions. They gain new VP as a result of achieving objectives; they lose VP when they lose units in combat. To win the game you must have more VP than your opponent; so play becomes a balancing act between expending VP and attaining objectives. There are 12,446 words in the game’s basic rules, and another 10,886 in the optionals (which will only be presented in the on-line eRules). That means two experienced players can complete the shortest of the game’s three scenarios in about six hours. The game has been designed with two-player play primarily in mind, but solitaire play is doable.