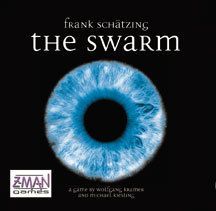 Based on the novel by Frank Schätzing, continuing the Kosmos line of literature-based games. The world is facing an ecological catastrophe caused by previously unknown marine life forms. Each player represents a nation sending their scientists out to confront the threat. The action cards form the core of the game. For each round, the cards are shuffled and placed in a row. Each player in turn order takes the leftmost card from the row, until there are no more cards left. Instead of the leftmost card, players can also buy a different card by paying with victory points. At the end of each round, players score points according to the sizes of their largest research networks. At the end of the game, extra points are given out based on whether research stations are connected to the center of the game board.