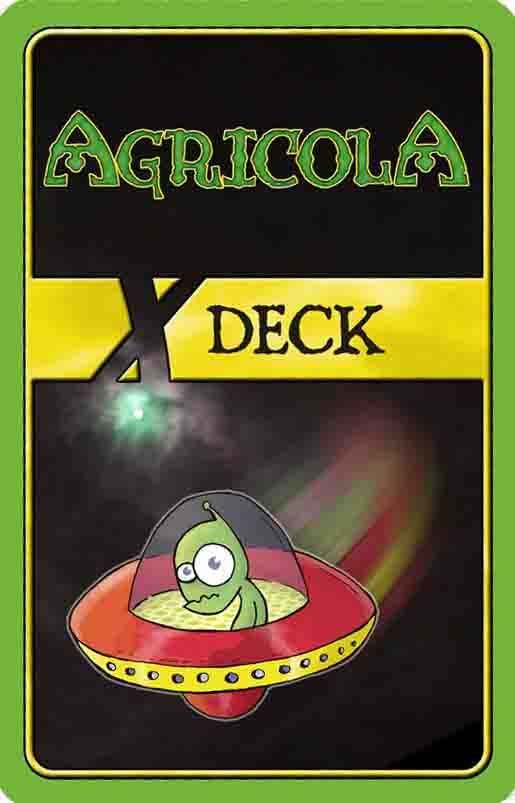 The Aliens are coming! The X Deck is a not-entirely-serious expansion for Uwe Rosenberg's Agricola, to be released through Spielbox magazine in German and through Lookout Games in English. The October 15, 2008, issue of Spielbox magazine includes a standalone add-on deck (in German) for Agricola that’s been dubbed the “X-deck.” The deck includes 24 cards of 5 different types (Alien Actions, Merchants from Outer Space, Alien Artifacts, Alien Events, and Alien Occupations). Art for this expansion is by Klemens Franz, the same artist who did the work for Agricola. The aliens arrive when the players create a Quarry; that is, when the "1 Stone" card from Stage II of the game (Rounds 5-7) is revealed. Whenever a player takes this action, they also draw the top card from the Alien Encounter Deck (X Deck). (Note that this does not apply to the "1 Stone" card that appears during Stage IV (Rounds 10-11).) Of course, you also take any Stone that is on the space. An English edition of this expansion has been available directly from Lookout Games and can be obtained by donating to a fundraiser via PayPal. It is also available via Agricola: The Goodies Expansion.