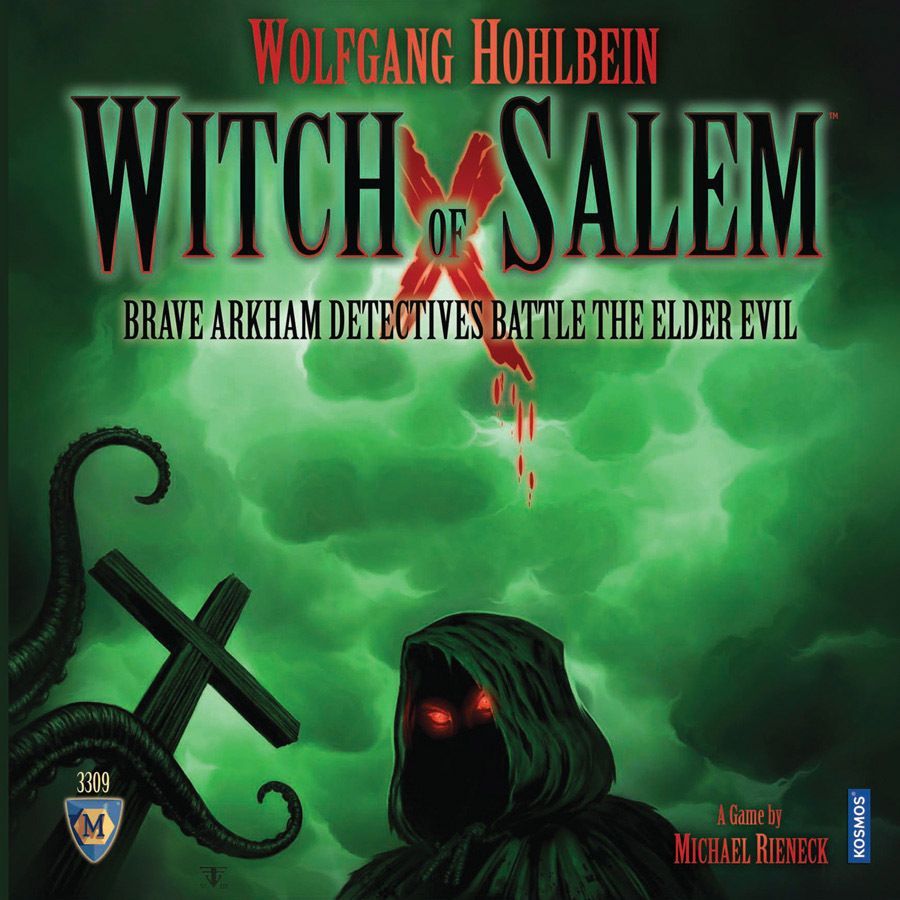 Witch of Salem is a cooperative boardgame based on Wolfgang Hohlbein's book series which in turn is based on H.P. Lovecraft's mythos. In this game, the players attempt to close all the gates to the other dimensions that have opened in Arkham city and thus preventing the Old One from entering our world. Players need to banish monsters and collect items in order to seal the eight gates before time on the doom-tracker runs out and the Great Old One awakens. The gameplay follows three steps in a fixed order: bringing new creatures in the game, the player actions and drawing an event card. The game can be won by succesfully by completing different goals: find out the active Great Old One, seal all eight gates and send a player with the right combination of items to the Great Old One to banish him. Losing the game cane be done in three different ways: the doom track runs out, the players fail to reveal the Great Old One in time or the players all go insane. From the publisher: Step back to early 20th Century New England. Here, the horrible "Great Old Ones" mysterious inhabitants of a dark, unfathomable void-seek entry into our world. One of their imprisoned overlords gathers them, just as his worldly servants open portals throughout Arkham for the coming onslaught. Only Salem's master witch, Robert Craven, holds the key to safeguarding mankind. He plans to gather a team of intrepid scholars to find the hidden portals and close them with powerful magic seals. The noble witch's elite team must battle the threat of madness, duel the dark servants, tackle mystical challenges, and face their ultimate nemesis: an unidentified Great Old One with an unknown and incalculable strength. In "Witch of Salem," you step into the terrifying world of renowned storyteller Wolfgang Hohlbein, a mythos inspired by the tales of H. P. Lovecraft. You play one of the witch's scholarly allies. Working cooperatively with your cohorts, uncover the secrets of the Necronomicon, combat creeping insanity, defeat the coming Evil, and bar the Great Old Ones from exiting the inter-dimensional abyss. Contains: 1 game board, 4 game figures, 1 witch figure, 1 Necron Stone, 1 battle die, 26 creature cards, 6 Great Old One cards, 12 event cards, 6 overview/turn cards, 32 minor location cards, 4 player boards, 34 item markers, 4 sanity markers, 6 artifact markers, 8 portal tiles, 1 cloth bag, game rules, brief history