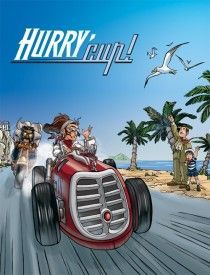 Drivers from all over Europe have arrived and are lined up on the starting line. Consisting of narrow and winding roads, the track is filled with dangers and promises a tricky race. As one of the fastest and fearless pilots in the race, you will try to pass the finish line before your opponents by being the quickest at spotting and grabbing the die which will allow you to move forward. Hurry'Cup is a car racing game where 3 to 6 players face off on tracks that are always different from one game to the next; as decided by the players themselves. Reflexes, dexterity, and risk-taking are the key to stepping first on the podium. It is a tile game with pavement-burning ambiance. Made up of 36 modular tiles, the Hurry'Cup race track offers many game possibilities, making it a new game each time. Hurry'Cup is a game with simple rules and Fast and Furious Fun.