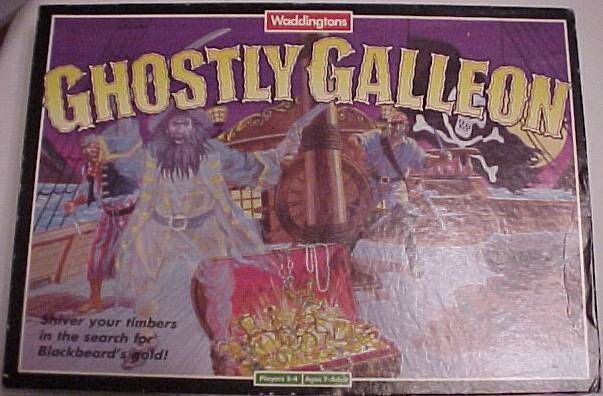 GHOSTLY GALLEON - 2-4 players Ages 7 and up Who will be the first pirate daring enough to board the Ghostly Galleon, search all the old sea chests for the treasure and take it back to his hideout ashore? COMPONENTS (some assembly required) Gameboard Ghostly Galleon consisting of: ... cardboard parts - 3 deck sections, 4 tattered sails ... plastic parts - hull, forecastle, quarterdeck, 2 masts, 2 yards, wheel, gangplank, 4 cannons, flag Blackbeard's "Glow-in-the-dark" Ghost 4 plastic playing pieces (fronts and backs) 6 treasure chests with lids 8 square weapon tiles 6 round key tiles (including 1 parrot tile) 6 oblong treasure tiles 3 dice 1 label sheet OBJECT OF THE GAME To be the first pirate to arrive back at your hideout with the gold pieces-of-eight treasure SETTING UP THE GAME Place the assembled galleon on the gameboard. Shuffle the weapons and place one face down on each of the skull-and-crossbones squares in the corners of the board. Put the other four away, out of play, without looking at them. Put one treasure tile into each chest and close the lids. Shuffle the chests and place them on the rectangles marked in the ship's cabins. Shuffle the key tiles and put them face down in a neat pile in the Haunted Cabin. Put Blackbeard in the Haunted Cabin. Each player chooses a pirate and puts him in his hideout - matching color segment in one corner of the board. Decide who will start. Takes turns clockwise. PLAYING THE GAME To move throw two dice and move the total of the two. You may go in any direction but you may not double back over the same squares in the middle of a turn. If you throw a double you DO NOT get another turn. There are four caves on the shore interconnected by secret passages. They allow you to move around the board quickly. Moving from one cave entrance to another counts as one step. You may move Blackbeard's ghost if you get a 6 on your dice-throw. Use him to help you and hinder other pirates. He may never leave the galleon. He may pass through a pirate in order to reach a square beyond him. He may enter a cabin occupied by a pirate. You can fire the cannon, you can be made to "walk the plank" and can be saved from the water by a floating barrel.