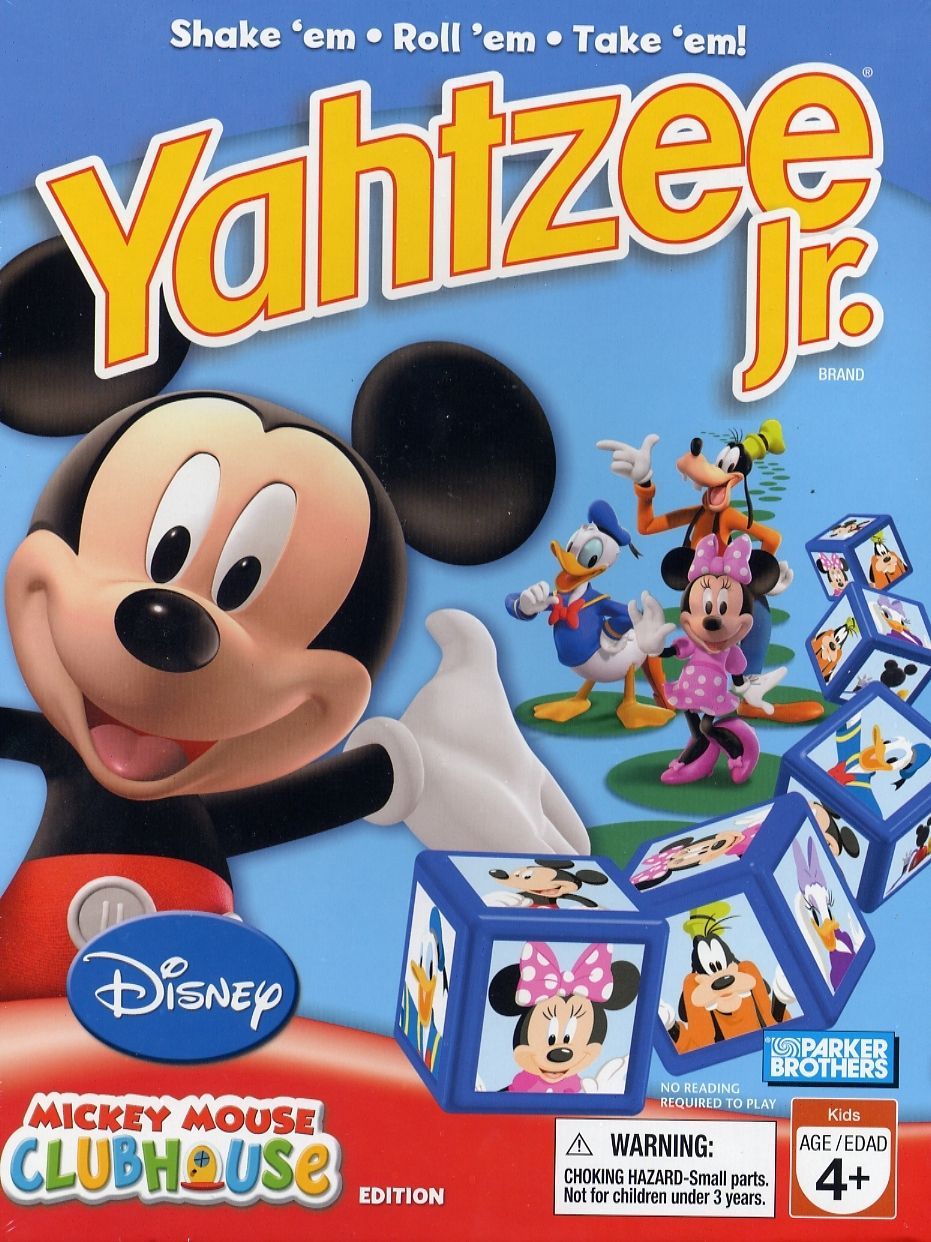 Yahtzee Jr. - for 2 to 4 players Ages 5 and up CONTENTS 5 dice, 20 scoring tokens, dice cup, scoreboard, label sheet (for making the dice) OBJECT Score the most points by rolling as many of the same Disney characters on the dice as you can. HOW TO PLAY The number of players determine how many turns each player takes in a game. 2-players - 5 turns 3-players - 4 turns 4-players - 3 turns Each player takes the 5 scoring tokens OF THE SAME COLOR. On each turn, you roll the dice UP TO THREE TIMES, trying to roll as many of the same Disney characters as you can. You roll Yahtzee style ... selecting the dice you wish to re-roll ... and re-rolling up to two times after your first roll. The Mickey Mouse dice icon is "wild" and can count as any character you wish. The more matching dice of a character you roll, the higher you score. To score, add up the matching dice of that character. Then mark the score by placing its matching token on the score board. HOW TO SCORE When you decide to either stop rolling or finish your third roll, you MUST add up your score for that turn. You could have rolled 1-of-a-kind, 2-of-a-kind, 3-of-a-kind, 4-of-a-kind, or 5-of-a-kind of a character. Always try to score the character with the most matches and place its token of your color on the scoreboard in the proper row and column. If you roll a character match that has already been scored by another player, place your token in the next OPEN scoring space to the left (lower number) of the already-placed token(s). On your third roll, if every character you roll is one that you've already scored, you must score ZERO for that turn. Place any one of your remaining character tokens on its matching face on the score board. Any token placed in this Picture Column score ZERO for that turn. WINNING THE GAME After all turns have been taken and scored, players then total up their scores by adding up the Column Numbers above each of their tokens. The player with the highest total wins. VARIANTS The Disney edition allows players to select their wild icon at the beginning of their turns, rather than keeping it fixed. The Kinder Kniffel editions have 5 dice, 5 frames with 25 disney tiles each, 1 dice cup, 1 board game and MORE SIMPLE RULES than Yahtzee Jr.; Yahtzee Jr. has 5 dice, 20 scoring tokens, dice cup, scoreboard, label sheet (for making the dice) and a set or rules for throwing the dice.