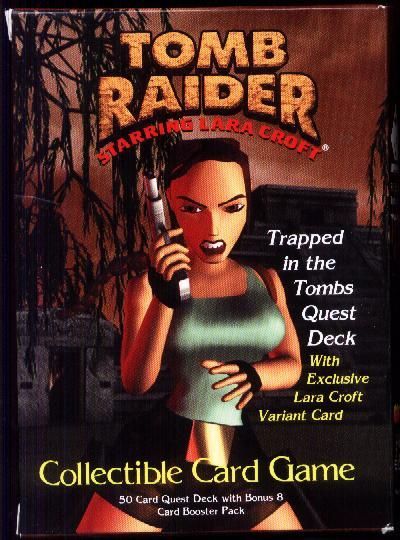 A collectible card game (CCG) set in the Tomb Raider universe. In Tomb Raider, you take the role of Lara Croft or one of her rival Tomb Raiders. You may explore a tomb or cave, or face some other mysterious and dangerous quest. During the game you will fight wild animals, defeat traps and overcome many other obstacles to find the level’s treasure and win the game! Tomb Raider is a collectible card game for two or more competing raiders. Each player who plans to compete for the treasure needs her own deck of Tomb Raider cards. Your group will also need several six-sided dice, plastic figures to represent your raiders and the various tokens included with each quest deck. Use coins or other tokens to represent additional Tomb Raiders if there are not enough different Lara figures for all of you. Tomb Raider can also be played by a single player. Online Play CCG Workshop (no longer available) VASSAL Current version 3.1 Tabletop Simulator Workshop mod