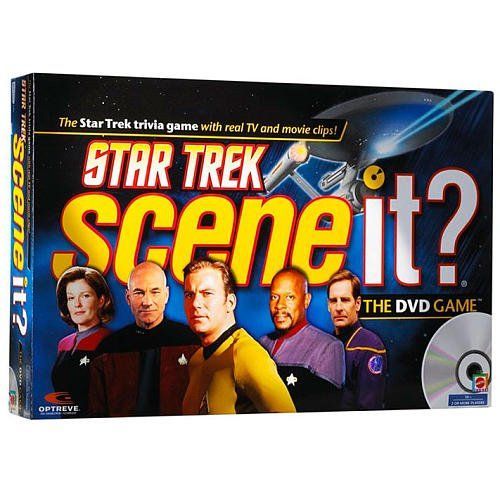 From the Publisher: From the second you load the game disc into your DVD player, you'll boldly go where no Star Trek fan has gone before. From The Menagerie to The Final Conflict, Scene It? Deluxe Star Trek Edition has it all. Real television and movie clips, trivia questions and a galaxy bursting with on-screen puzzlers will test whether you need to log a few more stardates at Star Fleet Academy or you're ready to face the Final Frontier! The game has been released in three versions: a regular Boxed Edition and two Deluxe "collector tin" Editions--SHIPS and CAPTAINS (depending on what's pictured on the cover). The Boxed Edition Game includes: * 1 DVD * 1 Flextime® Game Board * 1 Six-Sided Numbered Die * 1 Eight-Sided Category Die * 4 Plastic Movers (the Enterprise 1701, the Enterprise-D, the Defiant & the Voyager) * 10 Prime Directive Cards * 144 Trivia Cards * 4 Category Reference Cards * 1 Instruction Sheet Both Deluxe Edition Games differ as follows: * The "Movers" are now "4 Collectible Metal Tokens" (same ships as Boxed Edition) * 16 Prime Directive Cards instead of 10 * 175 Trivia Cards instead of 144 All the other game components are identical to their Boxed Edition counterparts. NOTE: Originally, the CAPTAINS set was to have five "Captain" movers (Kirk, Picard, Sisko, Janeway & Archer) in place of the ships, but this no longer seems to be the case. The only difference in the two Deluxe editions is the cover art.