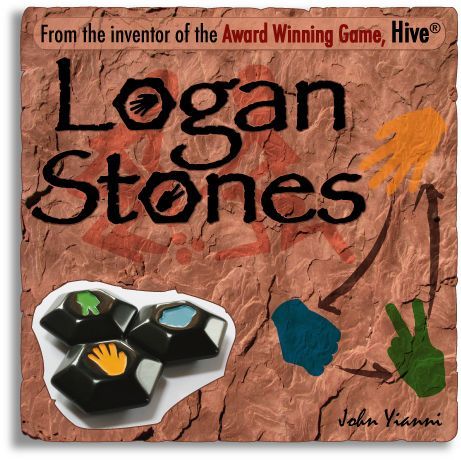 Publisher's description of this new hex-tile game scheduled to debut at Essen 2008: "Logan Stones is a two player strategic game that encourages memory and tactical thinking. It is played without a board, using 18 tactile pieces that are etched and painted on both sides with different symbols. The game has simple rules that are based on the visually recognizable symbols of Rock Paper Scissors. Logan Stones takes the simplicity of ‘Rock Paper Scissors’ and adds to it a fast paced, fun game, that can also be played with strategic precision for a much more thought provoking experience. The aim is to make a line of 4 of the same symbol, but as you and your opponent are in control of the same stones and with them constantly being flipped over to reveal new symbols, it’s not as simple as it sounds."