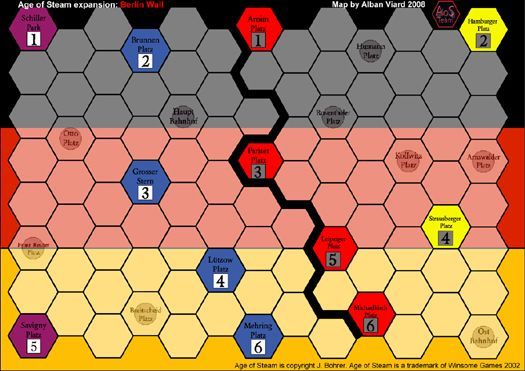 Washington DC and Berlin are another pair of Age of Steam maps created by highly regarded Age of Steam expansion designer Alban Viard. Washington DC focuses on the infamous freeways of the US capital. While the interstate can allow for quick goods transportation, it also becomes increasingly clogged as the game progresses and eventually becomes nearly impassable. The Berlin Wall, meanwhile, takes Age of Steam back to the era of the Cold War and the divided city of Berlin. Troop garrisons impede goods movement for much of the game, and the wall also presents an imposing obstacle. Of course, the fall of the wall in 1989 changes everything. The Berlin Wall map was reprinted in 2011 as part of Age of Steam Expansion: Moon and Berlin Wall.