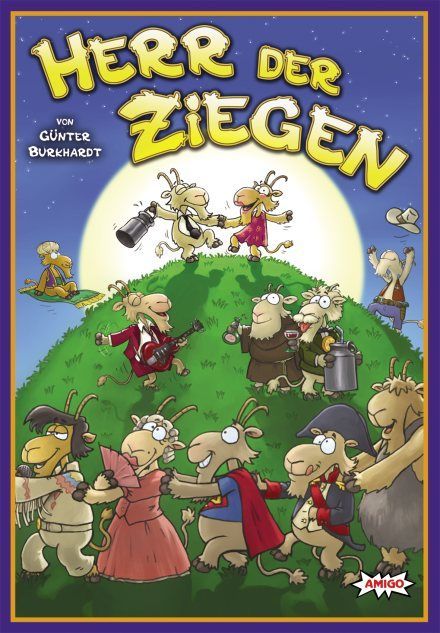 Players move around a 7x7 grid of many sets of goat cards, milk can cards, and herding dog cards, picking up one card each turn from the row their goat token lands next to. Cards are spent from a hand of two cards, first as movement points to keep moving around the grid on a subsequent turn, and second as melds to try to collect 8 points from a set of five goat cards numbered 1-5. Once 8 points is achieved, the remaining cards in that set of five cards are marked on the grid as belonging to that player, and those are the main victory points in the game. (There is a secondary way to score by collecting milk cans.) Players try to get the 8 points in several different sets as the game progresses. Once a player has some goats on the grid, the herding dog cards become useful. They are played to move his cards on the grid into a player's home scoring area -- the original "pen of goats" square he starts the game with, or any square contiguous to this gradually expanding area -- where the points are doubled.