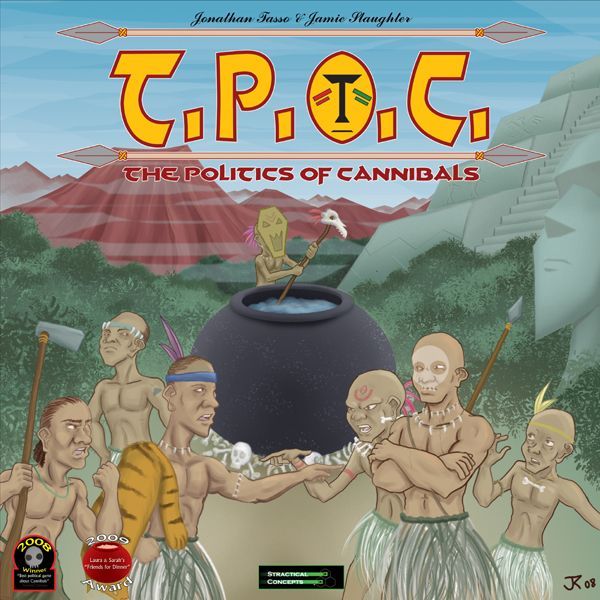 Welcome to the cannibal village of Tpoc! Disaster befalls the village when the latest chief of the village has died! Play the role of an ambitious young cannibal who wants to become the next chieftain by finding out the issues that are the most important to the members of the tribe. You need to both convince the majority that you have their best interests in mind, and serve those who support your rivals at your next meal. Once all the villagers who will be on the tribal counsel are identified, they will hold a vote for the next chieftain of Tpoc. Finally you will learn if the villagers will raise you to the position you deserve.., or if you have fallen out of favor, and into flavor! TPOC (The Politics of Cannibals) is a card and tile driven game for 3 - 5 players. You will play cards from your hand to the table before you to show your political "Platform." As the game progresses, tiles will be drawn from a bag to indicate how certain members of the tribe feel on one of 6 different issues such as (Religion, Farming, Labor, Trade, Cultural Identity, and Warfare.) Does a villager dare to challenge you? throw them into the POT! Each player must also be aware that at any time, one of the leaders of these six areas may decide to endorse the strongest candidate in their given area. At game end, the player whose platform cards best match the tiles in play wins the game.