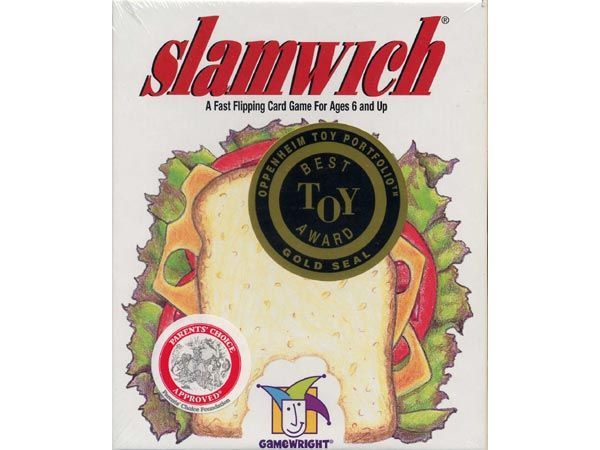 Slamwich is a real-time, pattern recognition card game such as Twitch, Set, and Bongo, with cards that are die-cut to resemble slices of bread topped with sandwich items, sandwich thieves, and sandwich munchers. To play, deal the deck out as evenly as possible, then set any remaining cards aside. One by one, each player takes the top card of her deck and flips it onto a central pile. Under certain conditions, players race to slap the pile — creating a "slamwich", if you will — and typically whoever is first to do so claims all of the cards in the pile. These conditions are: If the flipped card is identical to the card directly underneath it (a "double decker"), slap the pile. If two identical cards have exactly one card in between them (a "slamwich"), slap the pile. If a thief is placed on top of the cards, slap the pile. If a muncher is revealed, the next player flips as many cards as the number on the muncher card. If she fails to turn over a muncher card, the previous player claims all of the cards; if she creates a slamwich or double decker, or she plays a thief, then everyone races to slap the pile. If a player runs out of cards, she's out of the game. Whoever collects all of the cards wins.