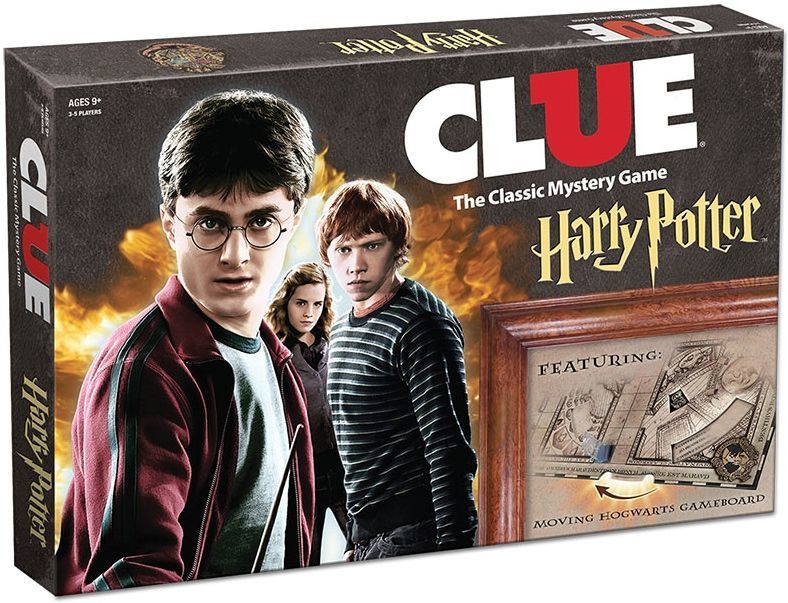 From the Manufacturer Discover the secrets of Hogwarts in this version of the classic Mystery game. Enjoy new game play features and a moving Hogwarts game board. Dark magic has been performed at Hogwarts. A fellow student has vanished from the famous School of Witchcraft and Wizardry--and it is up to you to solve the mysterious disappearance. Play as Harry, Ron, Hermione, Ginny, Luna or Neville and try to discover who did it, what spell or item they used, and where the student was attacked. Was it Draco Malfoy with a Sleeping Draught in the Owlery? Move around Hogwarts making suggestions--but watch out. Wheels on the board actually move to reveal secret passages, hidden staircases, and even the Dark Mark. Think you've gathered all the facts you need? Go to Dumbledore's office to make your final accusation to win the game. This version of the classic Clue game combines the standard clue idea of going from room to room making suggestions of who, what, and where. However, this version adds a few new ideas. The first is the ever changing board. On a players turn s/he roles three dice, two regular and a special die. The special die has the four houses of Hogwarts on it. This allows a player to change the layout of the board, by opening/closing doors, changing the secret passage way, reveling the dark mark (causing lose of house points), or getting help cards. The house points are a second change. In this version either a player can win, or all players can lose and the dark side wins, by getting all the players house points. House points are lost when the dark mark appears and a card is reveled from the dark deck. The players affected must either show a help card that protects them from the dark deck card, or lose the set number of house points. Dropping to zero house points causes a player to lose and out of the game. The other two card types are the third change in the game. There are help cards that consist of items, allies, and spells. These are used to combat the second deck, the Dark Deck. The dark deck cards are revealed when a dark mark appears either on the dice roll, or by moving the house wheels changing the door layouts. The dark mark card affect players in specific locations and those players must be able to show the indicated help cards or lose house points. All-in-all the idea is the same as traditional clue, but the extra things makes the game just different enough. People that like Clue and/or Harry Potter would enjoy this version.