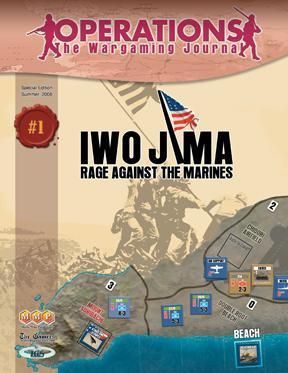 Iwo Jima - Rage Against the Marines is a two player game that is included in MMP's "Operations Special Magazine Issue #1." The game is a simulation covering the fighting occurring on the island from February 17 to March 14 1945. The Game includes rules (8 pages), a half-counter sheet of 88 x 5/8" counters, the game map, a mini-map for hidden Japanese movement, and a screen to prevent prying American eyes. The game is 9 turns long, American units are regiment-sized, and Japanese units represent about 1,000 men. Each game turn has four phases, Weather, US Phases (of which there are 7), Japanese Phases (of which there are 5), and an End Phase. The rules are laid out according to the sequence of play, and there is an extra page for special rules, scoring, and how to win. Reimplements The battle for Iwo-jima first published in Game Journal #16.