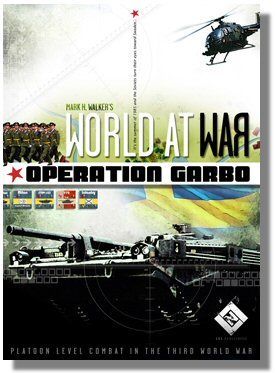 World at War: Operation Garbo takes the popular World at War game system into the hills and valleys of Sweden as their long-kept neutrality is violated by the Soviet Army. Swedish forces include its upgraded Mark 4 variant of the British Centurion tank, the famous Swedish S-tank—which has no turret!—and the PBV 302, a combat-proven APC. Other units include AT helicopters, tracked TOW and SAM launchers, and the hard-hitting, but fragile, IKV 91 tank destroyer. Home Guard units made up of old men with old rifles and fast, jeep-driving recon units support the heavier tank units. World at War: Operation Garbo is the latest expansion (You'll need to own either World at War: Eisenbach Gap or World at War: Blood and Bridges to play Operation Garbo.) in the World at War series. It features 176 counters, two mounted 11” x 17” maps, and 6 scenarios.