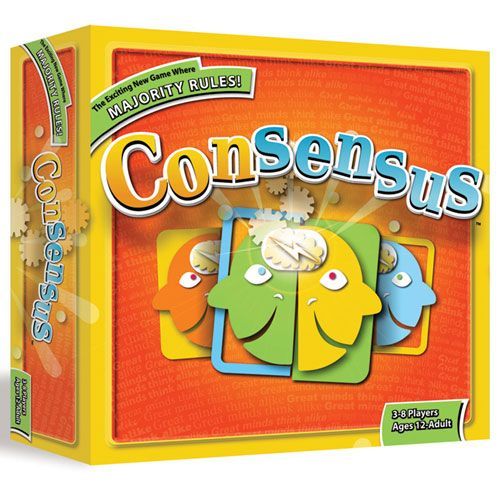 Ten Noun cards are place on a board (numbers 1 through 10 appear below each card's slot on the board). One Adjective card is placed up on the board as well. Each player has a pawn and a voting deck of the same color. The voting decks are simply sets of 10 numbered cards. Simultaneously, everyone places one of their voting cards face down, the Noun card number they feel best matches the Adjective. Majority rules and the Noun with the most votes is the "proper answer." Anyone who voted for that card moves forward one on the (short) scoring track. Once someone reaches the other end of the track, the game is over. Each round, any noun cards voted for are removed and replaced with new nouns and a new adjective replaces the previous one. Comes with 100 adjectives and 300 nouns. Web site is www.consensusgame.com