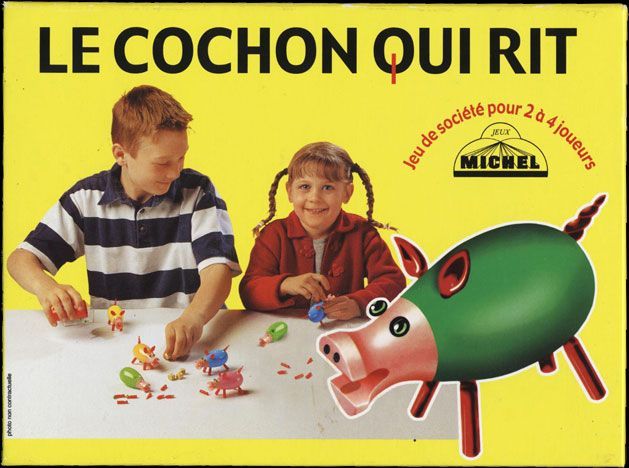 This game is played with 3 dice and a dice-box. Every player must have a pig (entirely in pieces at start). Throw the dice in turn; the highest point will begin to play. In order to be able to win the body of the pig, the player must first throw a 6 (the aces throw before, count for nothing at this stage). Afterwards it suffices to throw aces to have the right to place parts, i.e: 1 ace for 1 leg or 1 ear or 1 eye; for the tail, it is necessary to throw 2 aces at the same time. The same player can go on throwing dice as long as he throw aces; if he cannot complete his pig, he will give the following player the dice and wait for his next turn. The winner will be the player who completes his pig first. If the game is played for a prize of some kind, he will receive from the other players as many tokens as there remain parts for them to complete their pig; the tail is worth 5 tokens and players who were unable to complete the body must pay 15 tokens. (Tokens not in the box). + If the 6 is accompanied by one or two aces, take the body, place a part or the tail, and throw the dice again. Similar to: Cootie