The Stars Are Right - Universal Statistics 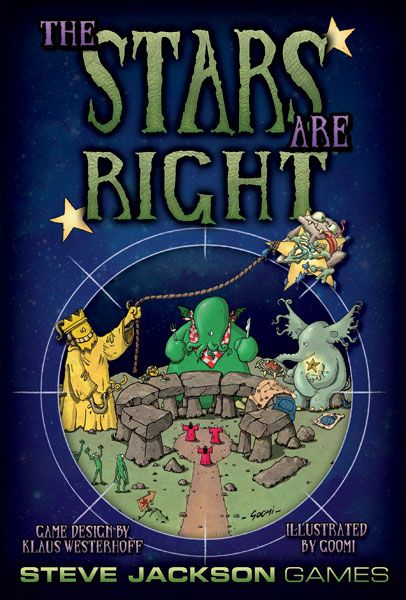 The Stars Are Right (German: Die Sterne Stehen Richtig) is a Cthulhu Mythos-themed card game illustrated by FranÃ§ois "Goomi" Launet, best known for his comic series "The Unspeakable Vault of Doom." In the game you'll start small, bringing ghasts and ghouls back to our reality. Invoke minor creatures to flip over a tile or push a row, creating the correct patterns to summon more and more powerful ones. Eventually, you'll build a horde of Servitors who can chain flips, pushes, and switches together; rearranging the entire grid to your whims. Change the skies, summon a Great Old One, and win! The game is won by acquiring 10 points first, which can be done by summoning many small creatures or going for Great Old Ones. Creatures which give more points tend to require more complex constellations. The night sky is represented by a 5x5 field of objects. It can be manipulated by moving a row by one object (cycling through), flipping one object (both sides have different objects), and switching two neighboring objects. The game was released in German in October of 2008. Steve Jackson Games released the English version in August of 2009.