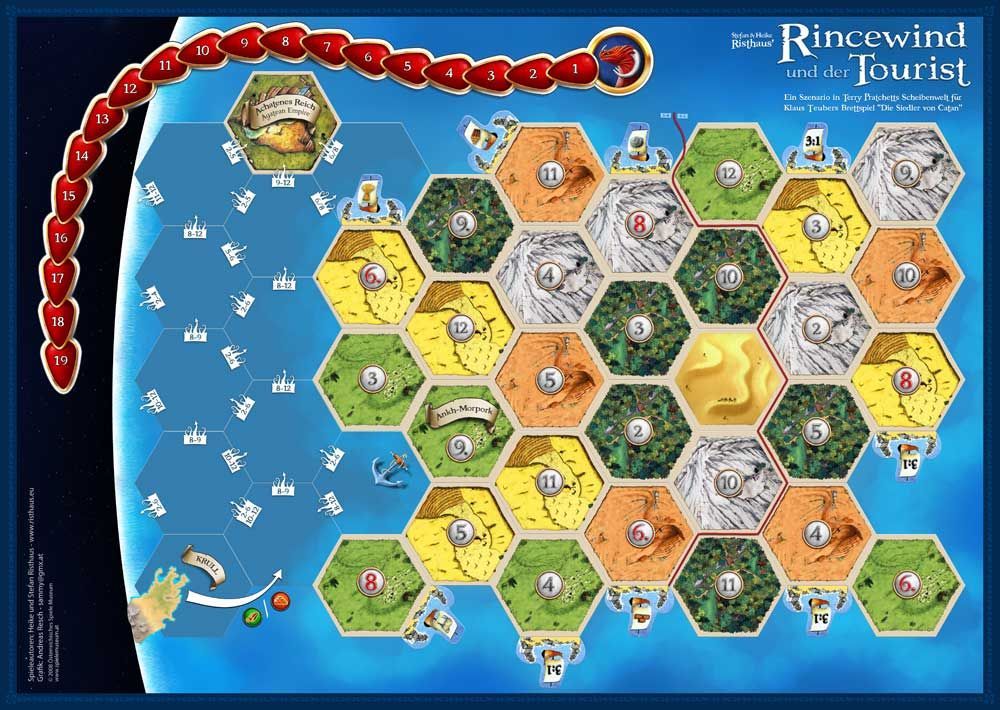 A pair of new scenarios for The Settlers of Catan acting in the DISCWORLD of Terry Pratchett. Not only Terry Pratchett, but also Klaus Teuber and KOSMOS agreed to the Scenario published in same quality as the last one of Österreichisches Spielemusuem Renaissance in der Steiermark/Burgbau in Chaffenberch. In "Die Gilden von Ankh-Morpork," join the Thieves, Assassins, Beggars, or other guilds and be a part of the biggest city on Discworld: Ankh-Morpork. Seek the favor of Lord Vetenari. This scenario has you build the city, only guild members may build in the outlying towns. Place settlements near the Guild Halls. Pay resources to the Guild of Thieves to be protected from robbers. Pay an assassin to eliminate neighbors so you can take over their small shops near other guilds. In "Rincewind und der Tourist," players have to trade resources as usual in Catan Games, but in addition they may create dragons with fantasy and magic, may travel like a tourist, or deliver resources by ship - but keep off the edge of Discworld, where your ships may be kidnapped before falling... This is the first official Catan scenario to have both 3-4 player and 5-6 capability in the same set. It only requires the base game; all other materials are provided by the scenario. Catan meets Discworld! Available for those who take part in the Austrian Catan Championships and during the upcoming 2008 Essen Fair at the booth of the Österreichische Spielemuseum. This scenario is part of the Catan series.