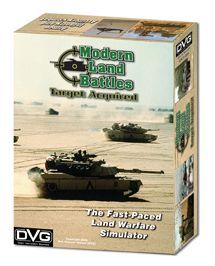 Description from the publisher: Modern Land Battles (MLB): Target Acquired uses the core game mechanisms from our award-winning Modern Naval Battles game. MLB takes you to the front lines in both historical and hypothetical conflicts ranging from the Arab-Israeli Wars to the present day. This new game features armor, infantry and artillery vehicles from 7 different nations: USA, USSR, UK, China, Israel, Insurgent, and Arabian Multinational. This gives you the forces you need to play out battles during the Cold War, Six-Day War, Iran-Iraq War, Vietnam War, Lebanon War, Yom Kippur War, Falkland Islands War, and Gulf War. The game system maximizes player decision making to make every turn exciting. At the start of the game, you get to select a nation's ground forces to command. Then, you get to select the specific armor, infantry, and artillery forces that you think is the best battle force. Once selected, you'll get to battle the forces selected by the other players in order to capture and secure vital objectives!